Recently a friend of ours (Bojidar, another Chicago transplant) was telling us about how his friend asked where they should go on vacation this year and he replied “Living in Seattle, I’m on vacation every day.”  Yes, that is what it feels like in this natural paradise. We’re on vacation every day (well, when we aren’t working, lol). But with Bojidar’s statement in mind, we decided to have a mini-vacation in town this weekend and we headed to Alki Beach. 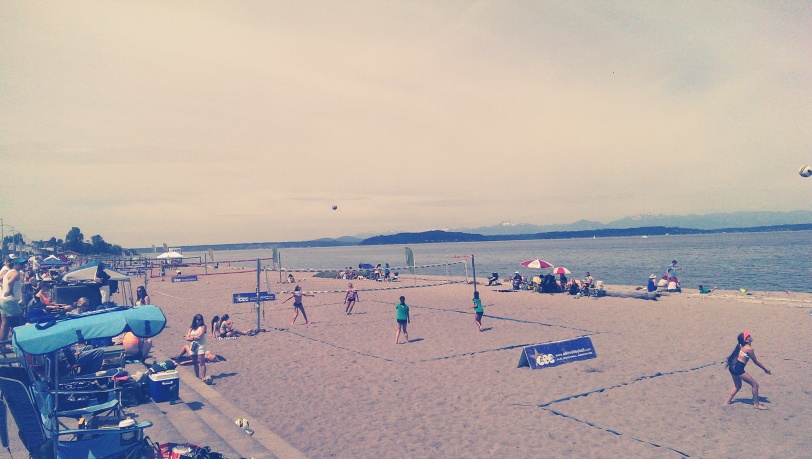 Alki Beach is a unique area within West Seattle, just west of downtown Seattle. It’s hard to define Alki – it is sort of like Venice Beach meets Fort Lauderdale meets Coney Island and yet at the same time, it is a place uniquely its own. Chad and I have been to Alki Beach in West Seattle many times. But today, we decided to experience it as a tourist would.

We had a Groupon for bicycle rentals at Wheel Fun Rentals on Alki. Wheel Fun (which ironically also has locations in California and Florida beach towns) offers beach cruisers, tandem bicycles, surreys – every typical “beach tourist” type of cycle. They also rent beach chairs and umbrellas (which I thought was a smart add-on for them, since they are located right across the street from the beach). Chad and I opted for single beach cruiser bikes.

Our Groupon  (along with a 2-for-the-price-of-one rental deal Wheel Fun offered today) gave us 2 hours of rental time. We crossed the street to the beachfront bicycle lane and rode south along the beach.

There is so many sights to take in on Alki and viewing them from bicycles was a new perspective for us. First off – there are Amazing views of the downtown Seattle skyline. Additionally, we saw scuba divers preparing to dive and kayakers taking off from Alki Kayak Tours (a great place to rent Kayaks – as we noted in our 48 Hours In and About Sunny Seattle post).

We saw other cyclists, pedestrians taking in the water and mountain views, and we saw this iron statue called Luna Girls, which was a tribute to the former Luna Park amusement Park which once stood at this site. Luna Girls are the bathing beauties from that time. Chad decided to strike a similar pose.

After cycling as far south as we could on the bike path, we turned around to head north along the beach. 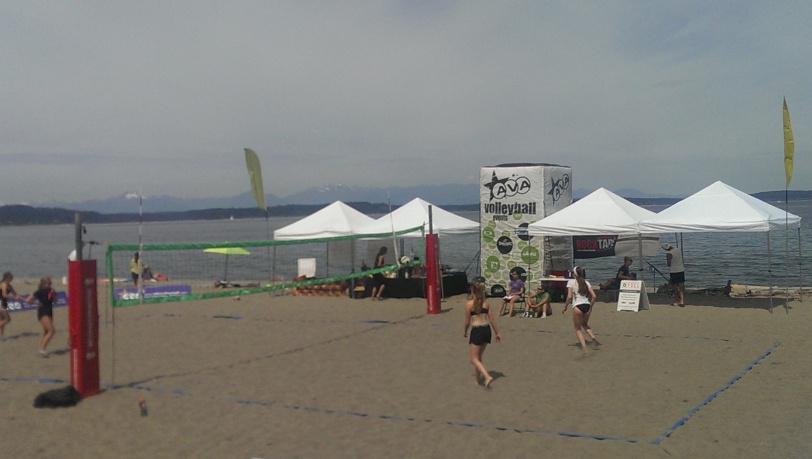 Alki Volleyball Association was having tournaments, and there were a dozen or so nets set up along the beach each having its own game. There were many spectators along the way and the games were very good. 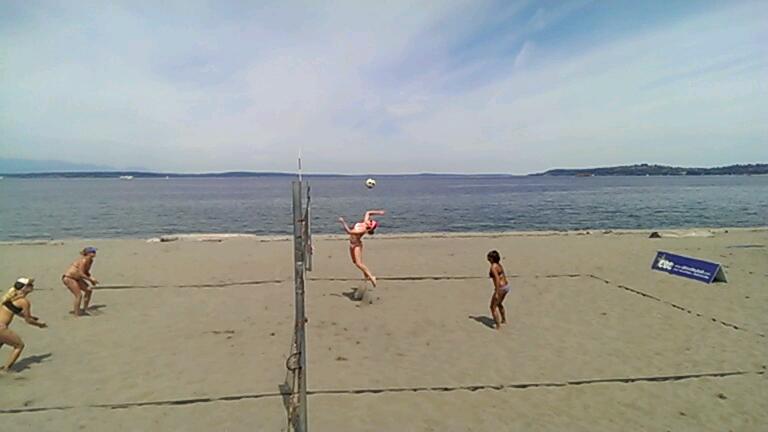 We rode further north passing the mini Statue of Liberty, a gift from Reginald H. Parsons and the Seattle Council of the Boy Scouts of America in 1952. 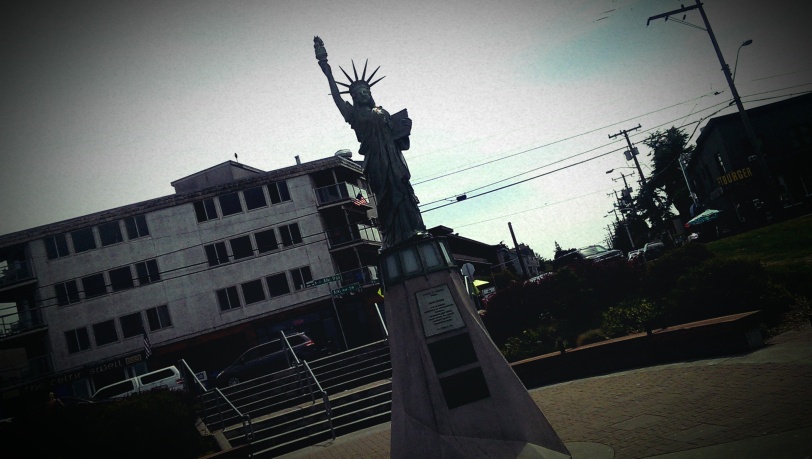 And then past the site of the Deny landing (where the Denny Party – the first white settlers of Seattle – landed on Alki Beach and were greeted by Chief Seattle, who welcomed them and helped them build a cabin for warmth in the winter of 1851).

The stretch from Alki Point (at the north) to Duwamish Head (the start of the Duwamish River to the south) is 2.5 miles.

The bike path along this route is nice and level – excellent for leisurely biking.

What can we say? It’s paradise here.

Chad and I completed the round trip tour in an hour. We didn’t feel like cycling for the 2nd hour, so we asked the folks at Wheel Fun for a credit. They explained that they couldn’t offer a credit, but that we could take out different cycles for the 2nd hour. We surveyed our options: surreys, tandems…despite our goal to act like tourists today, these options all felt too…well, touristy. The young man at Wheel Fun recommended the Chopper.

So we continued our tourist tour by stopping for lunch at Slices, a pizza by the slice hut on the beach.

The pizza there was surprisingly good. No offence, Slices, I just had low expectations. But the pizza was similar to great New York pizza. Hand-tossed, thin crusts, foldable (as one would fold their slice to eat it in New York). And the best thing about Slices, beyond the food, is their beach-view patio. 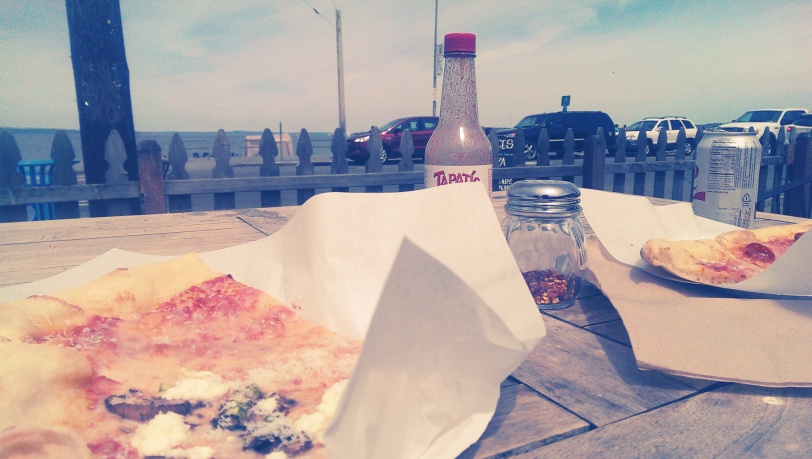 We enjoyed our slices looking at the beach and the boats on Puget Sound. It was like being on vacation!

After lunch, Chad and I acquiesced. Let’s do this! Let’s embrace the flag of tourism and ride those choppers!  So we returned to Wheel Fun Rentals and got the last two choppers in their inventory. I’m not kidding when I say it was FUN from the first pedal. 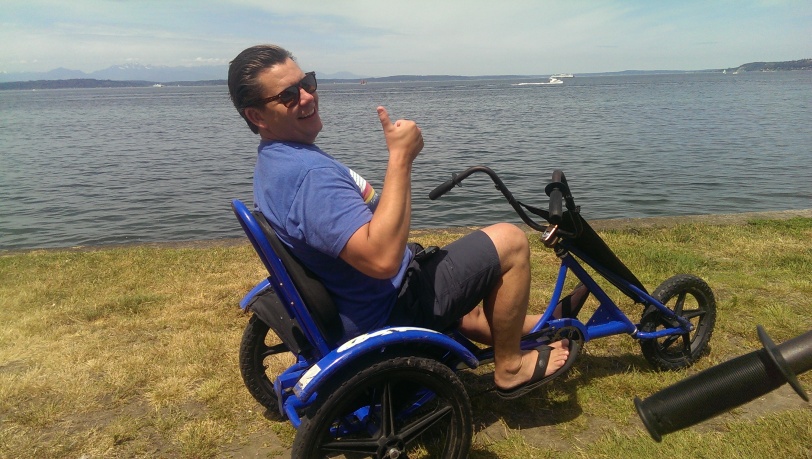 Choppers are basically beach versions of recumbent bicycles – or another way to think of them is oversized Big Wheels. 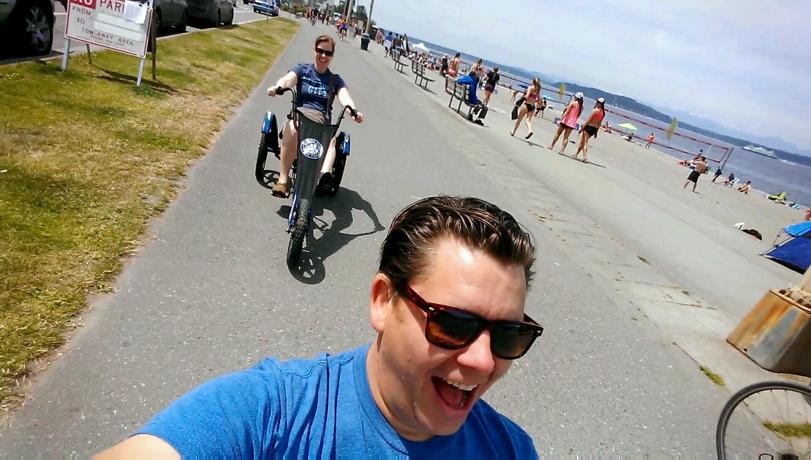 We took the same route we had cycled earlier – heading south along the beachfront bike lane. A nice pedestrian took a video of us peddling as she walked alongside us (clearly we weren’t going very fast!). We past the volleyball players. We rode alongside a few joggers, cheering them on in the hot sun.

Instead of going to the south end of trail, we turned in to the drive towards Jack Block park – a 15 acre industrial park along the Port of Seattle shoreline. Since we were on the choppers, we couldn’t go too far into the park, but the wide parking area allowed us to do doughnuts (the chopper has an amazing turning radius!) and resulted in me chasing Chad or really Chad chasing me in circles.

We cycled back to Alki, with Chad giving high-fives to cyclists coming towards us on the path and Chad giving a “thumbs up” to motorcyclists in the street – he felt a kindred spirit since he was on a “chopper” after all.

We returned the choppers, thanking the Wheel Fun Rentals guy for turning us on to the most fun bicycles ever, and then we headed over to Homefront Smoothies & Espresso (which really should be called Homefront 54 Flavors Ice Cream because that is really what they offer). I ordered a cup of the Black Cherry ice cream and Chad had a Death By Chocolate cone.

A day at the beach!

Eating our ice cream, strolling along Alki Beach, we once again felt like we were on vacation. Experiencing Alki Beach as a tourist would is such fun and we highly recommended it to all!