Aye matey, the skies were stormy this past Saturday as boats filled with Pirates slowly encroached on the beaches of West Seattle, preparing for their 65th straight landing at Alki Beach. 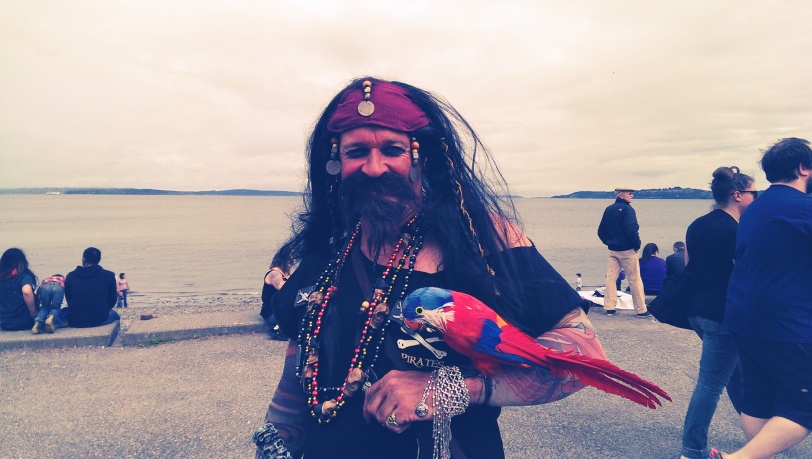 Shiver Me Timbers, a Pirate on Alki Beach!

One event that brings the Seattleites out each year is the annual Pirates Landing on Alki Beach.

The Pirates were formed in 1949 by the Washington State Press Club to promote Seafair. Each year the Pirates storm Alki Beach to renew old battles (their Captain Kidd and Davvy Jones against an “upstart” King Neptune). This annual duel of swords marks the official launch of Seafair.

We arrived early for the Pirate landing and joined the hundreds gathered along the beach. Sailboats arrived and anchored off Alki. 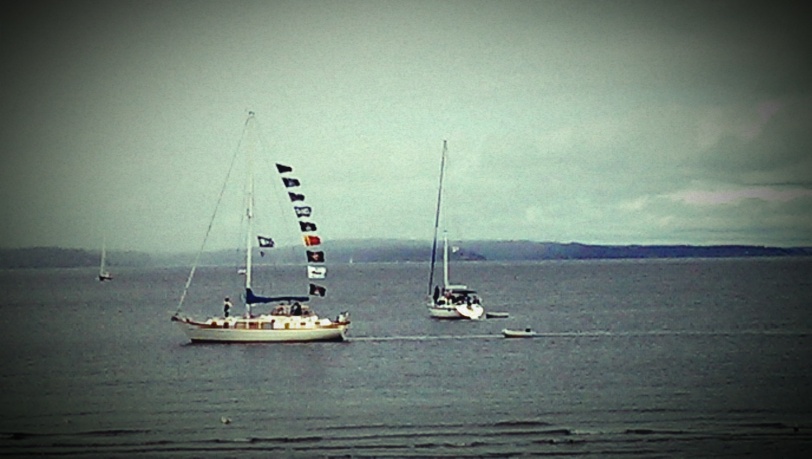 Pirate flags fluttered on masts and pistol shots were exchanged between awaiting boats in anticipation of the arrival of the Pirate ship. Finally, the Pirate ship appeared in the distance, unleashing cannon blasts that elicited cheers from the awaiting beach dwellers.

The pirates made landfall on some kind of souped-up landing craft that, reminiscent of the Normandy beach landing, has a gangplank upfront that opens up and from there, the Pirates descended and stormed onto the beach. 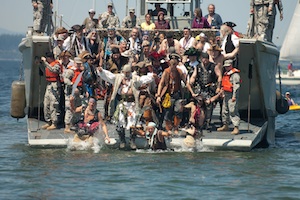 Once on the beach, they were greeted by an eager crowd that had to be held back like fans of the Beatles. 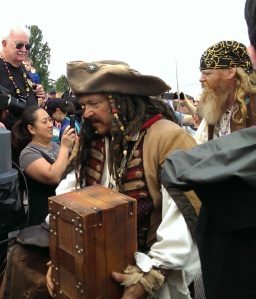 The Pirates met and took photos with the Seafair Princess court who had assembled on the beach to greet them and then they made their way to the podium to address the crowd with some hearty, “ARRGGGHHHH”

The shore was no less fun. Merchants sold delicious food, trinkets and lots of pirate attire, swords and hats. 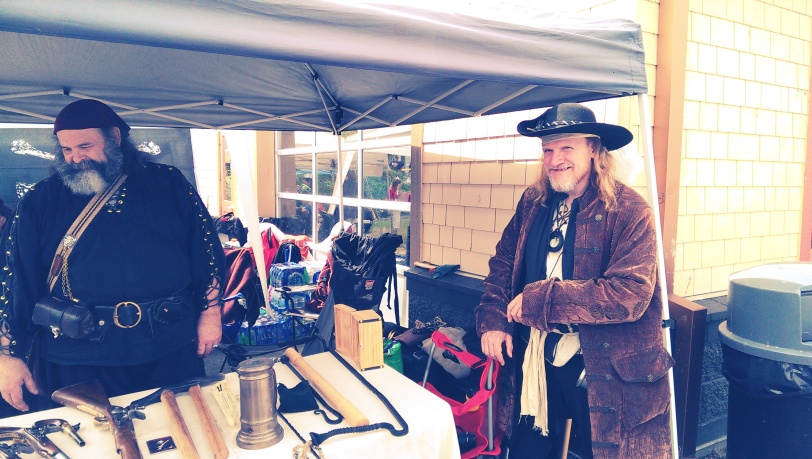 It worked out well for those who had not dressed up beforehand. There was a band stage with music and a more official appearance by the Seafair Princesses.

The Seafair Princess and Her Court

Just down the beach, concurrent with the Pirate festival, was the “19th Annual Alki Swashbuckler Beach Vault.”  Not a vault filled with buried treasure, but an annual pole vaulting competition (why not?). 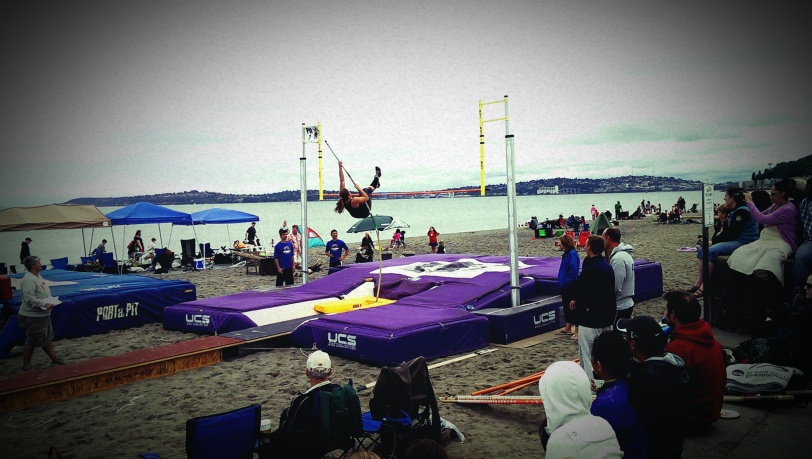 This particular pole vaulting competition is the 2nd longest running beach vault in America! Sponsored by the University of Washington Track and Field and Pole Vault Power, the competition featured contestants as young as 18 years old and as old as 81 years of age! 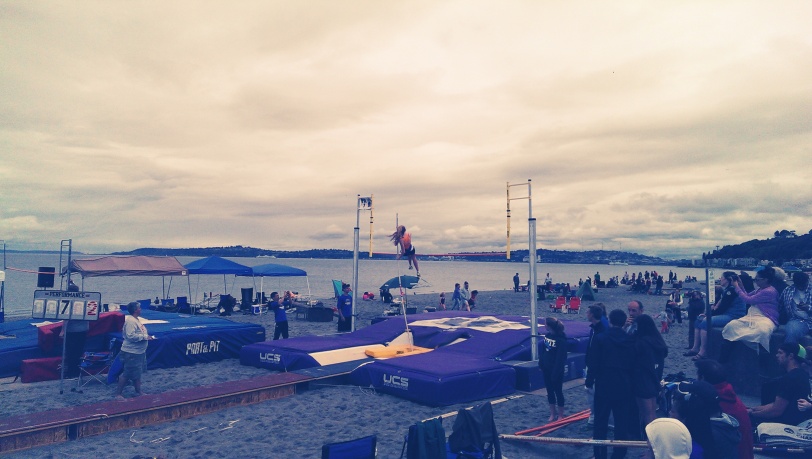 Chuck, the 81 year old pole vaulter, was in fine form. The announcer mentioned that Chuck is an all-around athlete – to celebrate his 80th birthday, Chuck ran 80 miles!  John, the second oldest at 79 years of age, was also a formidable contender. 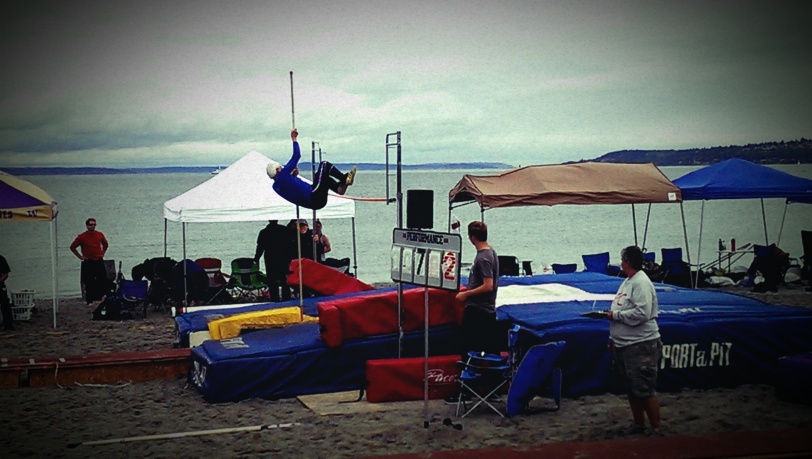 Chad and I had to smile at the complete randomness of the festivities of the day. Only in Seattle, we thought!

After walking the beach a bit, greeting weary pirates and dressing up a bit ourselves, 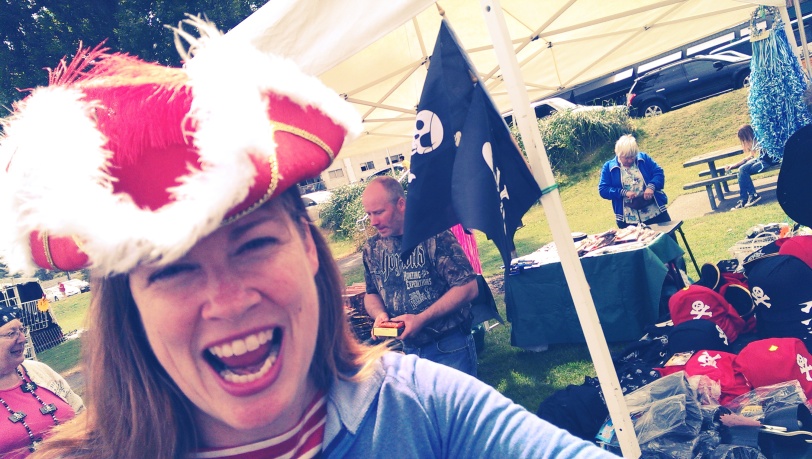 we headed to El Chupcabra for lunch just as the sun broke from behind the clouds. We were lucky to get the perfect outdoor table as the crowd, having had their fill of Pirates, were now looking to have their fill of this delicious and authentic Mexican food. 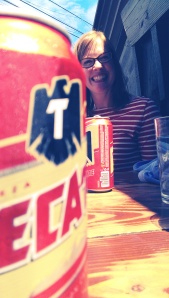 Chad and I each got a Tecate, I got the shrimp tacos and Chad got the fish burrito, both delicious. Chupacabra also has an amazing assortment of salsas on the table, not just your standard Tapatio, which, for full disclosure, Chad and I both love. But, pineapple salsa or a really hot habanero were offered. A must-have with your chips! In fact, we combined the two and it made for quite the treat.

We ate, settled up, discussed the Pirates and what perhaps was in store for them later in the day, then headed to our car to head out, just as the rain began to fall. 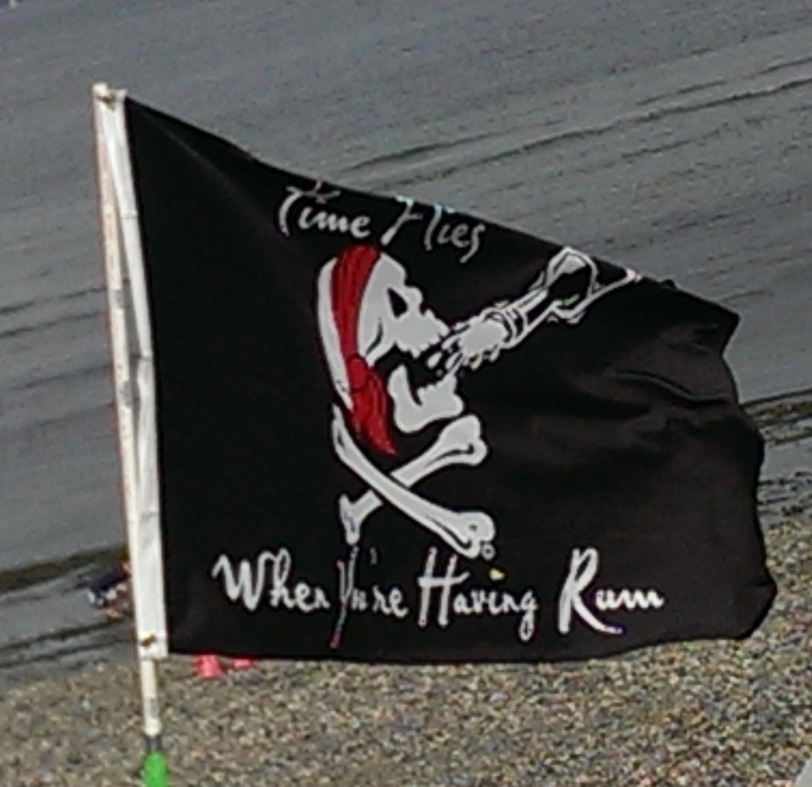 Time Flies When You’re Having Rum!

The Pirate landing and all the associated events, are without a doubt a crowd pleaser for old and young alike, so if you missed it this year, go next year, I won’t arrrrrrgue the points of why you will have fun, just known that you will.