This past Sunday was the first sunny day in months, literally months. So, like the rest of Seattle, we headed outdoors to enjoy some Vitamin D.

Years ago we had hiked up to the top of Poo Poo Point – Chirico Trail in Issaquah.

When we did this hike before, it was a somewhat rainy day, so the views from the top were not as spectacular as they could have been. Another thing we missed out on the first time around – paragliders. Poo Poo Point is a popular launch site for paragliders. 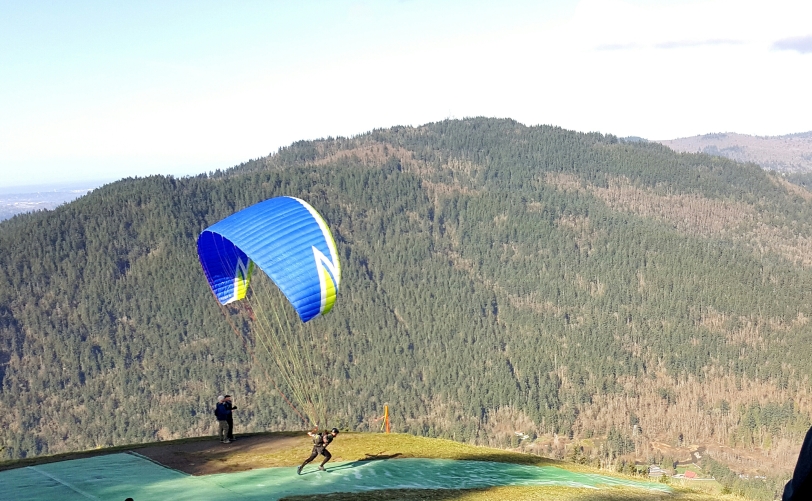 In recent years, we have tried to return to Poo Poo Point to hike it again, but the hike is so popular, that the parking lot is always full and cars are parked all the way up and down the street. So we’ve foregone this hike until this weekend. Knowing it would be a nice day, we got an early start and got to the Poo Poo Point Chirico Trailhead parking lot just after 8:00 a.m. And…the parking lot was full!  We couldn’t believe it! But thankfully, there were spots just outside the parking lot.

One creative (possibly illegal) way to fit into a parking spot!

The trail is steep, but not terribly difficult. For most of the time, you are in forested switchbacks dotted with many stone steps. 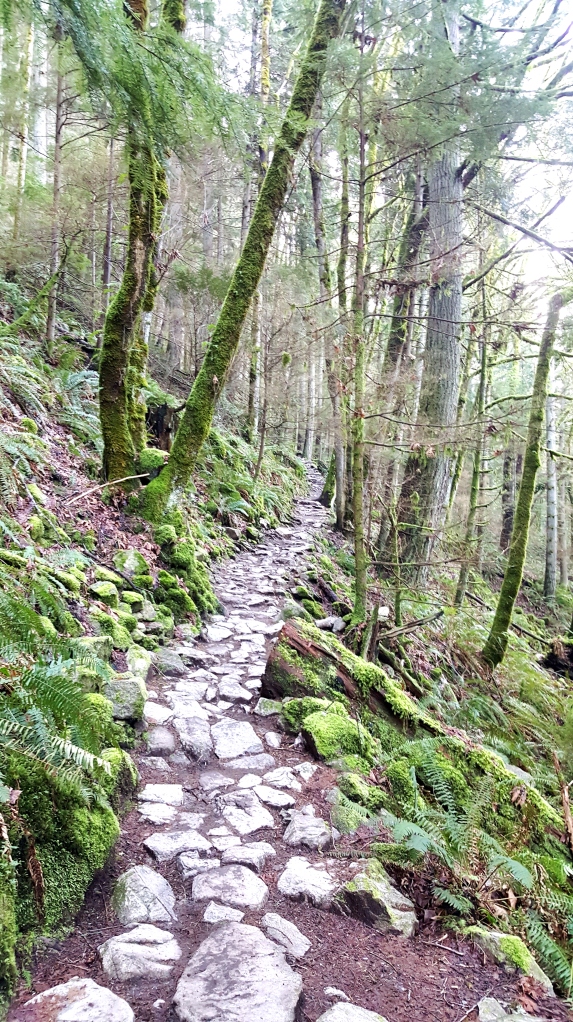 We were there early, but there were obviously hikers there before us (packed parking lot) and so we saw a few people descending as we were working our way up the mountain. 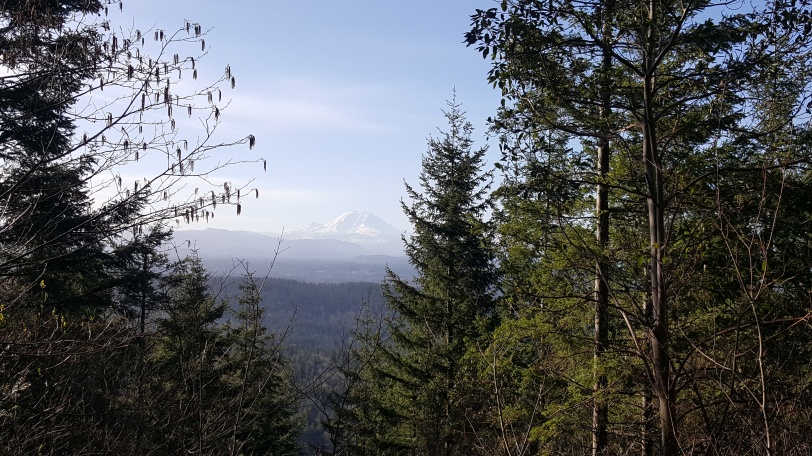 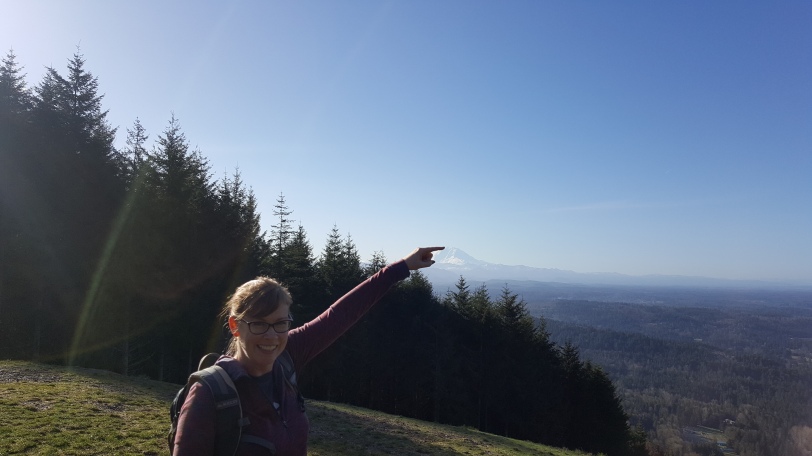 This was a good place to catch our breath and take some photos.

From the clearing, take the furthest left trail in a three-pronged fork. Once again you’ll find yourself in the forest, but thankfully it is not quite as steep as the earlier trail. After another quarter mile, we reached our destination – the North Launch viewpoint.

This mountain was once owned by the paper company Weyerhaeuser Corporation and they logged certain areas leaving clearings – the best of which is this North Launch viewpoint. It is a perfect spot for paragliders to take flight. 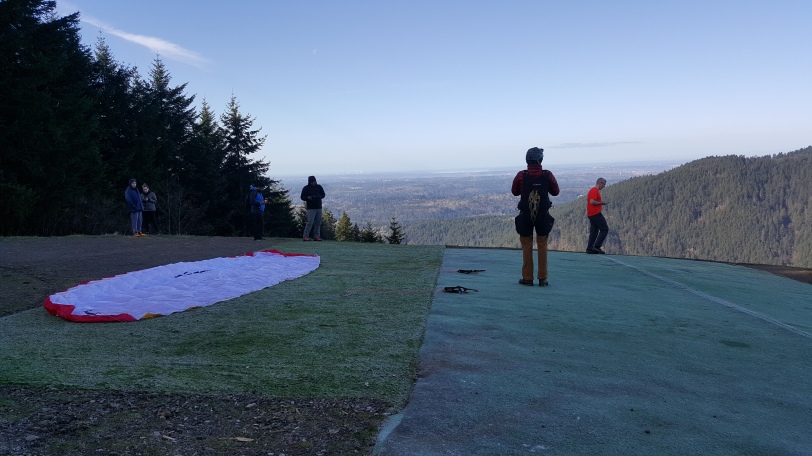 Even when we hiked this on the rainy day years ago, the views were stunning. You can see down to Issaquah, across to Lake Sammamish, with views of Bellevue in the background. If you turn left, you can see parts of Seattle. 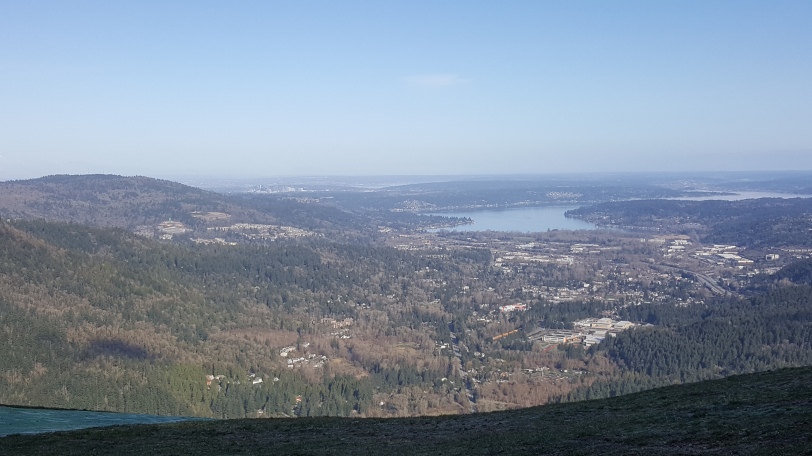 Today, we were lucky – there were plenty of paragliders here – happy to finally have a sunny day on which to launch. It was fascinating watching the paraglider pilots unfurl their sails, strap on harnesses, and then run and jump off the mountain from about 1,850 feet high. 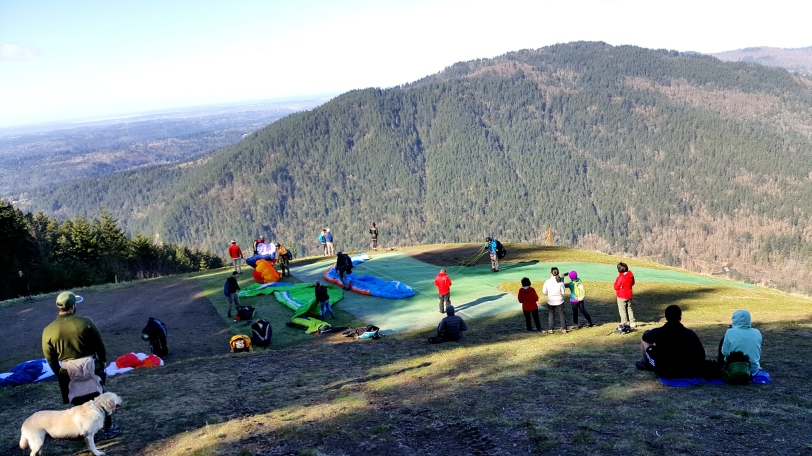 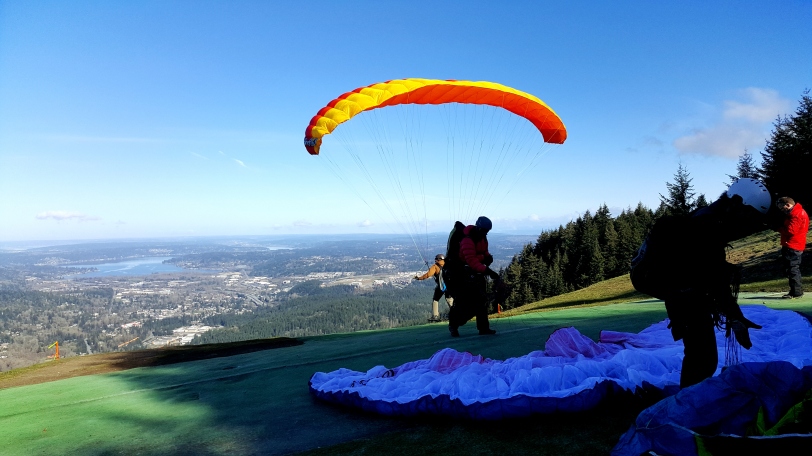 We met one such paraglider, preparing for flight, TJ Sopher. TJ was waiting for the right conditions – for thermals to develop later in the day, so during his wait, he enlightened Chad and me (along with some fascinated high school students who were standing nearby) on the tools and techniques of paragliding.

TJ said if we have any questions, he enjoys talking about paragliding, and of course we did have questions!  The first being…how does a beginner practice for jumping off a mountain?

TJ explained that they practice getting wind in their sails at nearby Lake Sammamish where they don’t have far to fall. Instruction and certification follow lots of study.

TJ showed us his GPS and communications gear. He explained the techniques for catching thermals and told us of some of his longer flights.

His longest being from Poo Poo Point to Bellingham**, more than 100 miles away! This flight took him over 6 hours. 6 hours of non-stop paragliding!

TJ has piloted all over the world and was hard pressed to name his favorite gliding site. When I asked if he has ever crashed into trees (there being a lot of them near Poo Poo Point), he said no, but that he would prefer crashing into trees where only his gear would get damaged. He said that in Eastern Washington, the site of many of their gliding competitions, there are no trees, so when a pilot crashes, that pilot usually breaks some bones! He suggested beginners try tandem flights and mentioned that if one were to sign up for a tandem flight via karmaflights.org, you would pay what you think the flight is worth and the proceeds go to Karma Flights – a Nepal based non-profit organization whose goal is to foster safe, secure education for children in Nepal by building a minimum of 20 earthquake-resistant schools, 22 libraries, and 2 solar-powered computer labs and by offering 300 long-term student scholarships, by the end of 2020. You can learn more about Karma Flights at http://www.karmaflights.org.

After a while of watching the various paraglider pilots, we made our descent (on foot) down the mountain. We stopped again at the South Launch viewpoint, where there were many more hikers (as it was getting to be mid-day, so more hikers were out). There were lots of dogs with their owners at the clearing, froliking in the grass. And, just as we were about to leave the clearing, we saw a female hiker with her pet…cockatoo.  Because, why not.

Apparently Goose, the cockatoo, loves hiking. The woman very nicely let us hold Goose, and so many photos ensued…

The hike down from the clearing was slow, mostly because of the flux of hikers that had appeared. It’s a narrow trail, so we yielded frequently to those coming up the steep terrain.

But it was very enjoyable and at the bottom, we saw a paraglider land in the clearing just near the parking area.

And, there was TJ, who had flown down quickly while we were hiking.

Poo Poo Point has much to offer, but our advice (per normal) is get there early so you can enjoy some of the serenity before the crowds arrive.

Directions to the Chirico Trailhead: From Seattle, drive east on Hwy I-90 and take exit 17 into downtown Issaquah. Drive through downtown Issaquah continuing on Hobart Road for about 3 miles.  The parking lot will be on the left adjacent to the paraglider landing field. The parking lot may be full, but as mentioned above, you can park (where parking is allowed – see parking signs) up and down the street. There is also a pay lot (for $5) on the other side of the street just before you reach the trailhead parking lot.

Trail stats:  The hike is about 3.8 miles roundtrip with 1,760 feet of elevation gain.

** Correction: The longest flight for TJ Sopher was from Chelan Butte to Fairfield, Washington – 140.5 miles! This flight stands as a world record for distance in an organized competition (the 2016 US Paragliding Nationals).