Early on in our days in the PacWest, we discovered the charming town of Issaquah and it’s equally charming theater, Village Theater. In years past, we’ve enjoyed Village Theater’s productions of Chicago, Funny Girl, Cabaret, and many others. This year we decided to get season tickets and last night we enjoyed our first show of the season: Pump Boys & Dinettes.

Pump Boys & Dinettes originated in New York, but it was also a popular mainstay at Chicago’s Apollo Theater for many years. I had seen it there several years ago when I was living in Chicago’s Lakeview neighborhood.

Touted as a “concert-style show about life’s simple pleasures,” Pump Boys & Dinettes is just that – there is not much to the plot, but what it lacks in story, it more than makes up for in song and dance. The story revolves around the men and women who work at a gas station and a neighboring diner somewhere in North Carolina. In between fishing and serving up pies in the diner, these characters break into wonderful songs such as “Farmers Tan” and “Tips.” 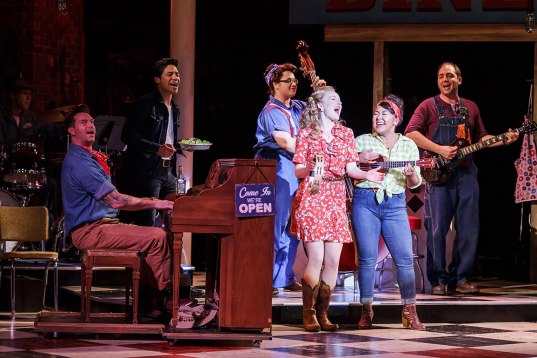 Each cast member plays at least one (if not multiple) musical instruments and all but two, the talented bass player Olivia Hamilton and the drummer Jim “Riff” Reif, sing songs. Both Hamilton and Reif are typically orchestra pit musicians, so it is fun to see their joy at being on stage. The cast even includes a Tony Award winner – Levi Kreis as one of the pump boys. Kreis won the Tony Award in 2010 for Best Featured Actor in a Musical for his performance of Jerry Lee Lewis in “Million Dollar Quartet.” 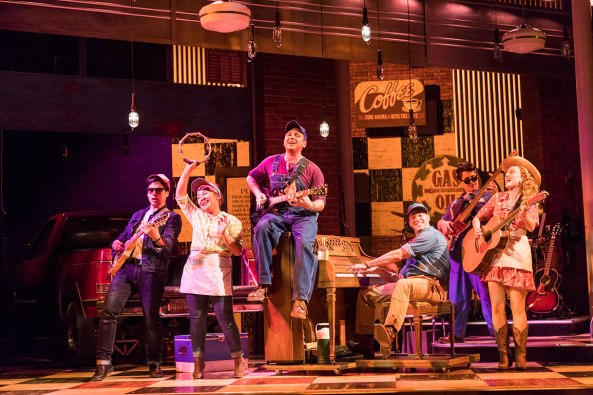 The real showstopper, we felt, was the song “Be Good or Be Gone,” performed by Sara Porkalob. Her rendition reminded me of a young Aretha Franklin singing “Think” in the movie The Blues Brothers. Porkalob had the same feisty intensity and the lungs to back these vocals. Joshua Carter’s performance of the ballad “Mamaw” was another delight – particularly as each member of the cast contributed to the harmony in their own unique way. After the last song, “Closing Time,” when the gas station and the dinette closed their doors, the cast broke into a medley of the shows best hits. The audience was clapping along and everyone enjoyed this foot stompin’ good time.

Pump Boys & Dinettes is playing at Village Theater in Issaquah now through October 23 and then at Everett’s Performing Arts Center October 28 through November 20.

Tickets for the Issaquah Village Theater performance are available at their box office in the Francis Gaudette Theatre
303 Front Street North, Issaquah, WA 98027
On their website: http://www.villagetheatre.org/issaquah/pump-boys-and-dinettes.php
or by phone (425)392-2202.