Crystal clear blue skies, a lake or two, and a really big mountain. What more could you ask for in a hike?  It has been a while since Chad and I have hiked in Mount Rainier National Park. Since it was beautiful weather with clear skies last Sunday, we decided to take the drive and check out Naches Peak Loop Trail. I had read that this trail offers some of the best views of Mount Rainier (and it does!). 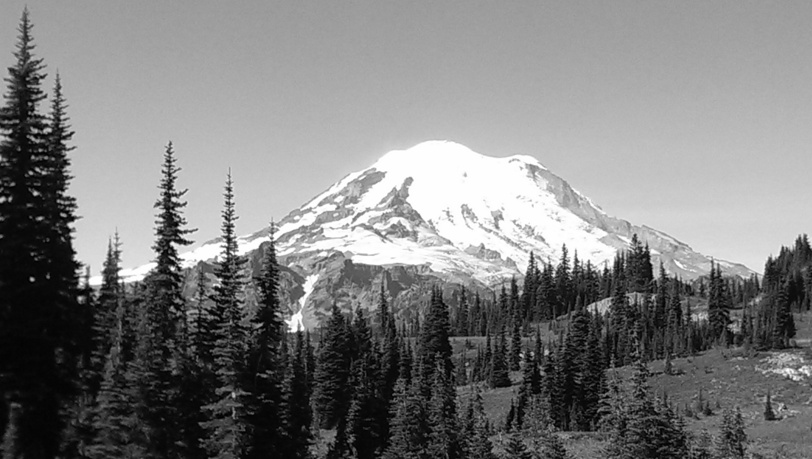 The trail is relatively easy – a great hike for hikers of all ages. We recommend taking the loop in a clockwise direction for the best “Rainier in your face!” views. If you hike the loop counterclockwise, Mt. Rainier will be behind you for most of the hike.  So for the best views, from the Tipsoo Lake Parking lot, take the trail towards Tipsoo Lake and Naches Peak and head towards your left to head northeast around the Lake. 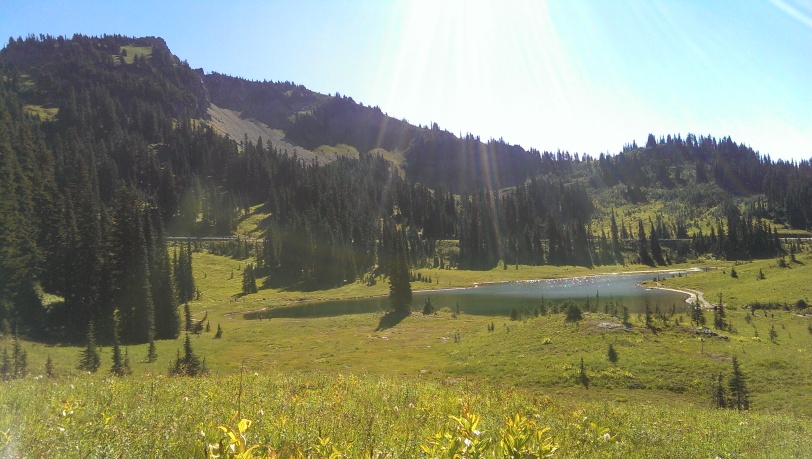 The trail starts in some beautiful meadows surrounding a small lake before ascending through an area of trees to an area where you have to cross the road via a bridge to join the Pacific Crest Trail.

Ever since reading Wild by Cheryl Strayed, I’ve been obsessed with the Pacific Crest Trail, so I’m always excited when I’m on this particular trail. For those of you who haven’t read Wild, the Pacific Crest Trail (also known as the PCT) is the west coast version of the Appalachian Trail. The PCT travels 2,633 miles from the south at the US border to Mexico all the way north through the Sierra Nevada and Cascade mountains to the US border with Canada near British Columbia. The highest peak of the trail is 13,153 feet in the Sierra Nevadas. But I digress…

I don’t know what our exact elevation was when we joined the PCT on the Naches Peak Loop Trail, but I think it was somewhere around 5,200 feet (and we drove up to that point). This loop trail has a mild elevation gain of 600 feet, so the highest elevation you reach is just under 5,900 feet.

There is not much fanfare noting this event, just a simple marker on a tree. Around the bend, the peaks and fall colors started to show. 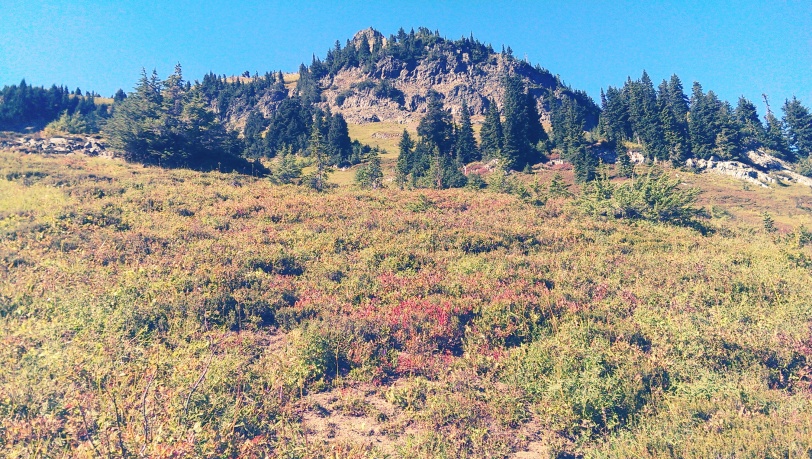 Ascending a little further, after about 1.5 miles, we came across the most wonderful spot overlooking Dewey Lake.

Dewey Lake and its surrounding peaks were picture perfect – truly a magnificent area. This is a great area to stop and have a picnic lunch. We questioned if we should hike the few miles down to Dewey Lake, but we decided to save this for another time.

After our rest at the Dewey Lake overlook, we continued on the Naches Peak Trail, looping around Naches Mountain, and BOOM – there it was at last – Mt. Rainier (or, as I like to call it, “the big mountain”).

Just as we looked up and saw Mt. Rainier smiling in front of us, there was a flat rock area where people took in the splendour of the big mountain. We, too, stopped to marvel at it. It never gets old. Never…

We took our time continuing on, knowing the trail was short and wanting to enjoy the view, not only of Rainier in front of us, but also of Mt. Adams off in the distance to the south. Below is a video showing our amazing panoramic views.

Chad spotted some hawks enjoying the thermal winds and so we watched these for a short while. 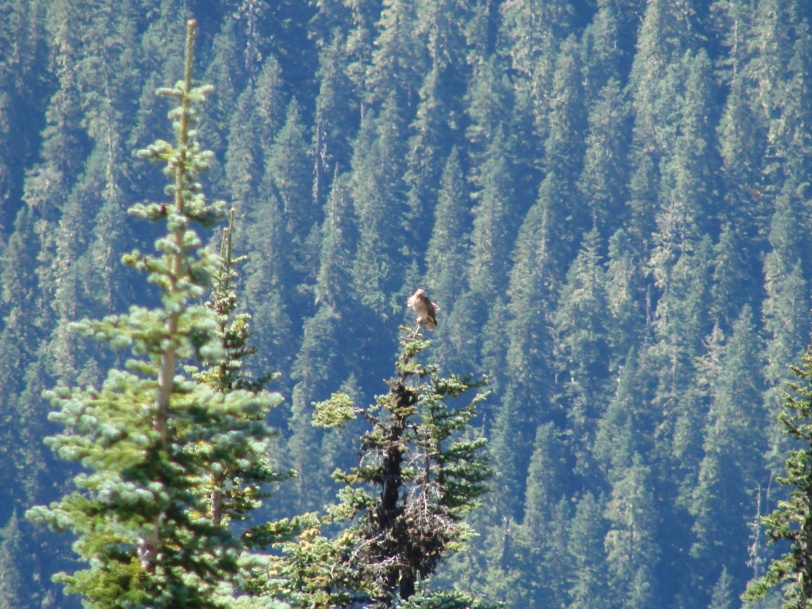 A fellow hiker stopped to point out Mt. Adams to us and to regale us with stories of when Mt. St. Helens blew her top. I think we all held our breaths and said a silent prayer, since we were hiking next to the largest stratovolcano in the area… 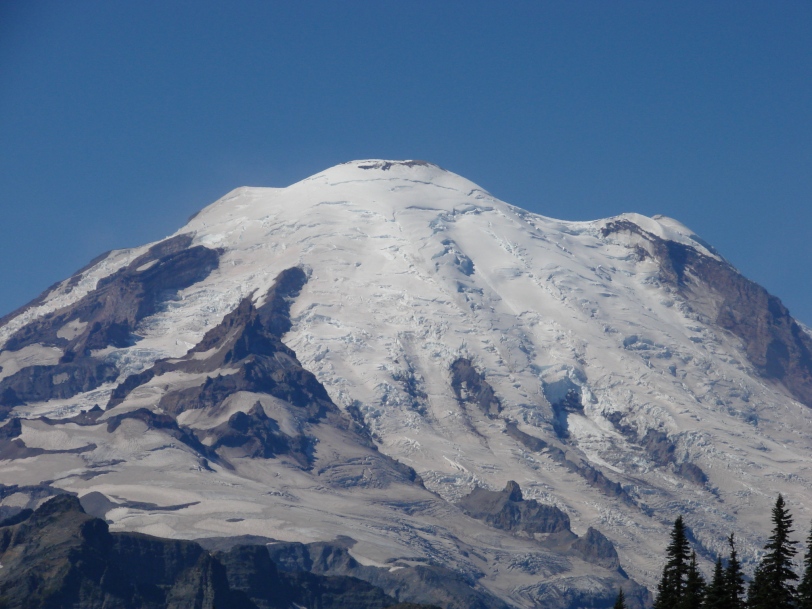 The loop back to the parking area is roughly 1.5 miles, making the round trip journey about 3 miles. It was short but sweet – really breathtaking.

After our hike, we stopped at Naches Tavern in Greenwater for a bite.

This rustic tavern, which has been operating since “the very early 20th century,” seems as though it should have been in the tv show “Twin Peaks.” The inside holds just as much rustic charm as the outside, and they have an outdoor dining area for beautiful days such as this one. We found the prices a bit high (especially for a veggie burger!), but the food was tasty and the service friendly, so it was a nice way to end our hike.

Naches Peak Loop Trail is a great way to get the beauty of Mount Rainier National Park (and the big mountain itself) without too taxing a climb. The best times to hike this trail are late summer to early fall. Please note: pets are not allowed on the west half of the trail (the part in Mt. Rainier National Park).