Recently, several of our friends joined us at Ninja Escape Seattle, a relatively new escape room challenge which has live escape rooms in the Fremont and Belltown neighborhoods of Seattle. What is an “escape room challenge?” Simply put, you and a team of people (your friends or sometimes you can be paired with strangers) are put in a locked room filled with fun props that contain clues. You have a time limit to find the clues and solve the puzzle that will ultimately unlock the room and allow you to escape.

Escape room challenges are popular with families, parties, and as work-team-building challenges.

Our Ninja Escape challenge was presented to us as follows:

“Your team of Ninja puzzlers are dropped into the office of Mr. Hancock – a rogue member of The Kraken – our ancient enemy. He has stolen billions of dollars from our client. Can you solve the mysteries, recover the account, and escape before The Kraken return? Yes you can, if you are Ninja enough.” 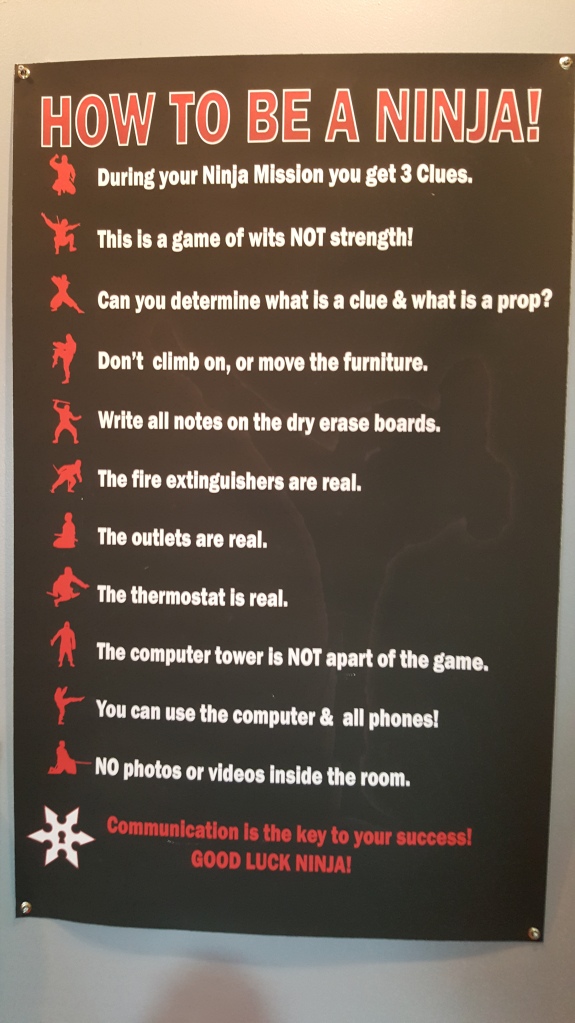 We were given 60 minutes to solve the puzzle and escape. We quickly broke into small teams to solve the various tasks. We used math, deduction, and crazy logic to decode puzzles and open locks. Things that seemed benign were worth a second look. Other things that looked significant proved to be red herrings.

(Sure I’m blatently disregarding rule # 11 with the above photo, but I got Ninja Escape staff permission!)

The Ninja Escape staff watched us on video cameras and they allowed us to hold up a sign stating “Need a Clue” from time to time. We were allowed three clues and I believe we only requested two. The staff, however, would also call us on the room phone if they saw us veering too far offtrack.

The Ninja Escape room was clever in its use of sounds, lights, and other automated surprises. A menacing voice would alert us as the time ticked down. “You have ten minutes left!”

Were we Ninja enough? Apparently only 20% of Ninja Escape Seattle participants solve the puzzle.

But we came close! Even though we did not succeed in escaping the room, everyone had a great time and all agreed we would try Ninja Escape’s other escape room challenges soon.

Please note there are also Ninja Escape challenges in Belltown. For more info, go to the Escape Ninja website.

Disclosure:  Ninja Escape graciously provided complimentary products/services to try and review.  The opinions expressed here are our own, which we take great pride in providing with unmitigated honesty.

One thought on “Ninja Escape – A Fun and Challenging Mission”