Happy week after Thanksgiving! This year, we were thankful to join friends for Thanksgiving at Rosario Resort on Orcas Island. We left Seattle on Thursday morning and returned on Saturday evening. The entire trip was magical. Below is a summary of our time there:

Thursday Morning: We were off to a great start departing on the Orcas Island Ferry from Anacortes.

The skies were blue and sunny with not a cloud above. 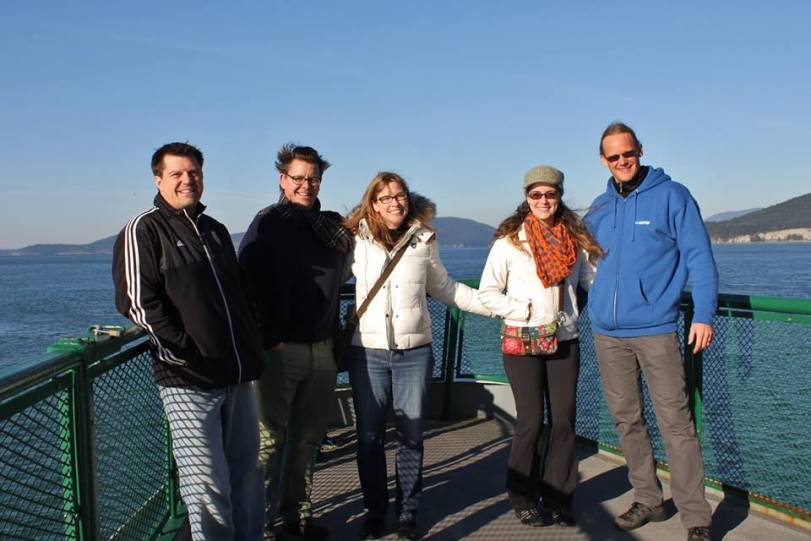 Arriving on Orcas, we drove north towards the town of Eastsound, continuing southeast  to Rosario Resort. Rosario Resort is a gorgeous resort steeped in history. The resort was originally the mansion of a turn-of-the-century shipbuilder (and one-time Seattle mayor), Robert Moran. Finding his health deteriorating from the stress of his business (which included building the USS Nebraska – Washington state’s only battleship, and having previously rebuilt Seattle while serving as Mayor during and after the great Seattle fire), Moran decided to build himself a home on Orcas Island in which to live his remaining days (he was told he only had one year to live). Moran lived on Orcas for 39 more years! 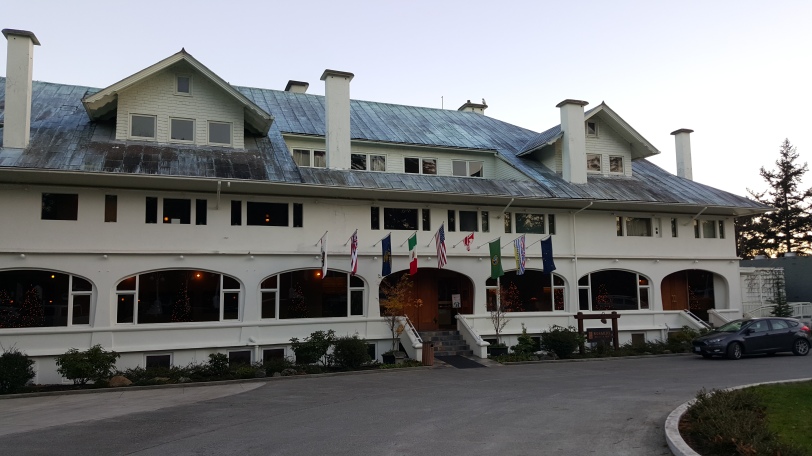 Eventually the estate was sold and became the resort it is today. Listed on the National Register of Historic Places, Rosario Resort is a  beautiful place with the mansion serving as a museum (featuring original furnishings from the early 1900’s and photographs from the late 1800’s and early 1900’s), the main dining area, a lounge, and a spa. While there are no guest rooms in the mansion, there are several out-buildings spread out over 40 acres which house the guests.

We stayed in a gorgeous Bayside Room and had the most wonderful balcony with views of the bay.

Truly, I could have spent our entire trip sitting on that balcony, enjoying the views, waving at the local Bufflehead birds diving for fish in the Bay, and occasionally spotting a harbor seal. But there were too many other places to see and things to do on the island, so we limited ourselves to a brief pre-dinner treat of cheese, crackers and wine on the balcony. 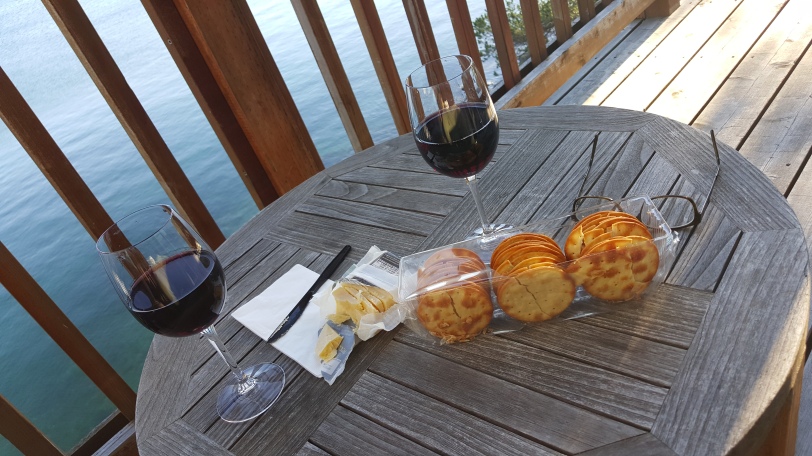 Thursday Evening:  Rosario Resort offers a Thanksgiving Dinner in the Mansion Restaurant. Our friends Crystal and Troy have been coming here for a few years and this year, they invited several friends to join them and their families. At dinner there were 14 in our party and it was a great group!

After dinner, we met in the Moran Lounge (which was the original living room of the mansion) to play games and enjoy some drinks by the fire.

Friday Morning: We awoke to the most spectacular sunrise.

We agreed with REI when it comes to Black Friday – get outside! After breakfast at the resort, we drove south towards Moran State Park.

Chad and I stopped by one of the many lakes within the park, Cascade Lake, which is conveniently located along Olga Road (the main road leading through this side of the island. In the summer, I am sure this lake is packed with swimmers, people renting paddleboats, and picnickers. 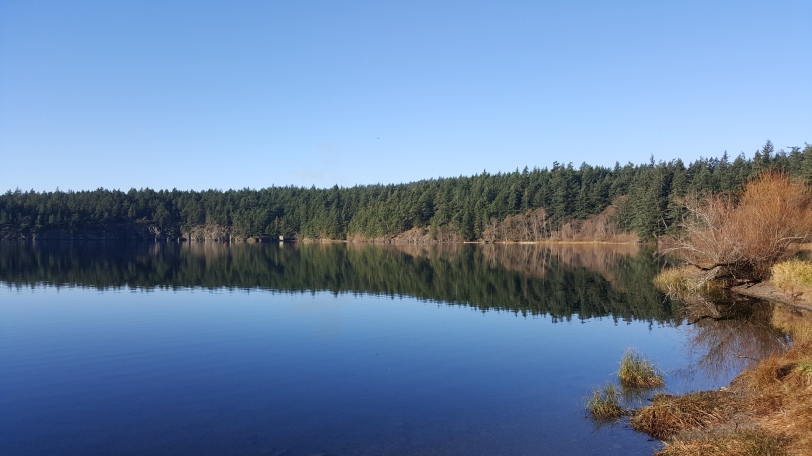 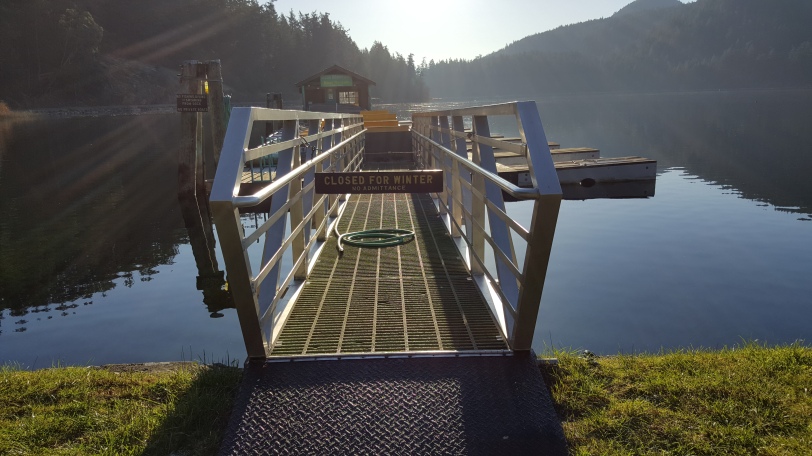 As the park is technically closed for the winter, there were just a small handful of people at the park enjoying the views. 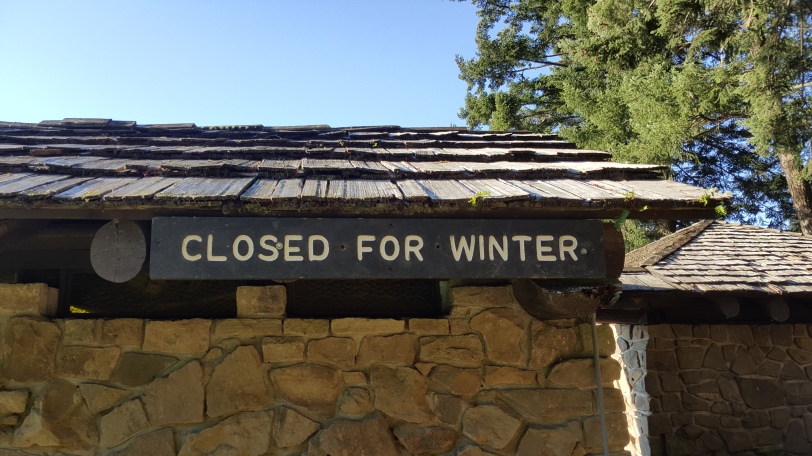 We walked along the lakefront heading north from the main parking area. Chad stopped to hug some trees

and then came across Cascade Creek, which is home to thousands of spawning trout.

It was fascinating watching these trout attempt to swim upstream. We were so tempted to pick up some of the tired fish and place them further upstream, but we know better than to interfere with nature.

After a while, we got in our car and headed for our next destination on the island:  Buck Bay Shellfish Farm. Sadly, they too were closed for winter. 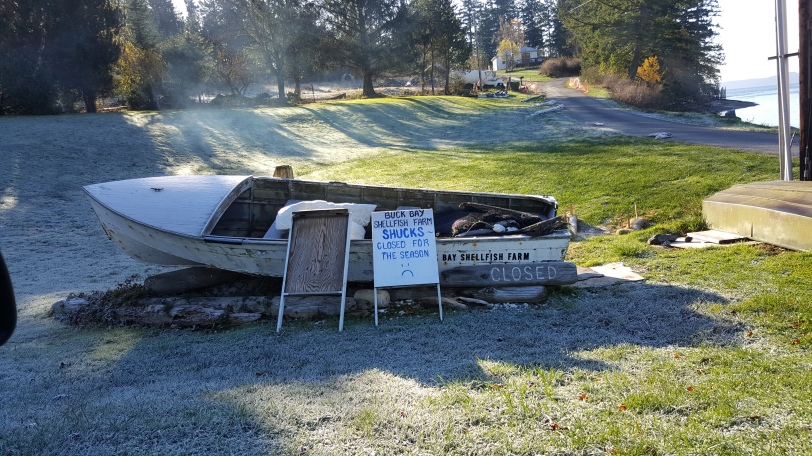 ultimately leading to a beach across the water from Obstruction Island.

Chad and I walked the short trail down to the beach and despite the 40 degree weather, enjoyed the sunshine basking the rocks.

We met our friends Kit and Phillip in the parking area – they arrived just as we were leaving. They, too, enjoyed time on the sunny beach (I’m pretty sure Kit took a nap there!).

Chad and I drove on towards Doe Bay.

Doe Bay has the reputation of being the island’s “hippy retreat”. It features small cottages, a yoga studio, a cafe and store, and several yurts.

What Doe Bay Resort is best known for, however, are the soaking tubs. We didn’t partake of the tubs on this trip, but the place does look truly peaceful and might be worth a visit in the future.

Friday Lunch:  On our way back towards Rosario, we stopped at the Artworks Gallery and Catkin Cafe located in the historic Strawberry Barreling Building

in the town of Olga, Washington. Trying to eat light after our Thanksgiving buffet the night before, we both enjoyed the freshly made cream of cauliflower soup. It was delicious!

After lunch, we visited more of the charming town of Olga

and then drove the north side of the island, exploring the local airport and north beach (where we saw a lovely bald eagle and had a stunning view of Mt. Baker)

before making our way into bustling Eastsound. Eastsound has several boutiques, galleries, cafes, and a quaint bookstore. We shopped around with other “Black Friday” shoppers – ok, technically we shopped on Black Friday, but really it was just a rest from our hikes!

At 4:00 pm, back at Rosario Resort, we enjoyed a lovely concert given by local historian and accomplished musician Christopher Peacock.

The Rosario Mansion features a Steinway Grand Piano which was built on December 31, 1900 – one of the last pianos to be built in that year. It also features a stunning 1,972 pipe Aeolian Organ. Peacock entertained us with songs on both the piano and the organ, while showing slides of black and white photos from Robert Moran’s collection. The concert ended with a showing of the silent film Phantom of the Opera starring Lon Chaney while Peacock played the modern Andrew Lloyd Webber Phantom songs on the organ. It was quite a treat.

After the concert, we were allowed up in the balcony of the music room to see the organ and see Robert Moran’s original library.

We left the music room and went down to the lower level of the mansion to check out the resort’s spa. The spa has the original indoor pool built by Robert Moran, as well as a jacuzzi pool and sauna. It was very relaxing!

Friday Evening: For dinner, Kit, Phillip, Chad and I ventured into Eastsound for some authentic Mexican food at Mijitas Mexican Kitchen. This restaurant has been recommended to us both on this trip and our past trip. During our past visit, the restaurant was closed, so we were delighted to get reservations this time around. Chad and Phillip both enjoyed the special Dungeness Crab Enchiladas, Kit had the beef shortribs, and I enjoyed chili verde.

After dinner we met up with the rest of our group at Lower Tavern in Eastsound to celebrate Crystal’s birthday. Lower Tavern hosts karaoke on Friday nights, so we were in for some entertainment!  At the table next to ours was a large group also celebrating a birthday. This group were all born entertainers and we enjoyed watching them perform 80’s song after 80’s song. It started with “Love is a Battlefield” by Pat Benatar and escalated from there. Vicki was the only one brave enough from our group to get up and sing. She performed “Birthday” by the Beatles for Crystal and then later performed “One Way or Another” by Blondie. She is very talented and brave! 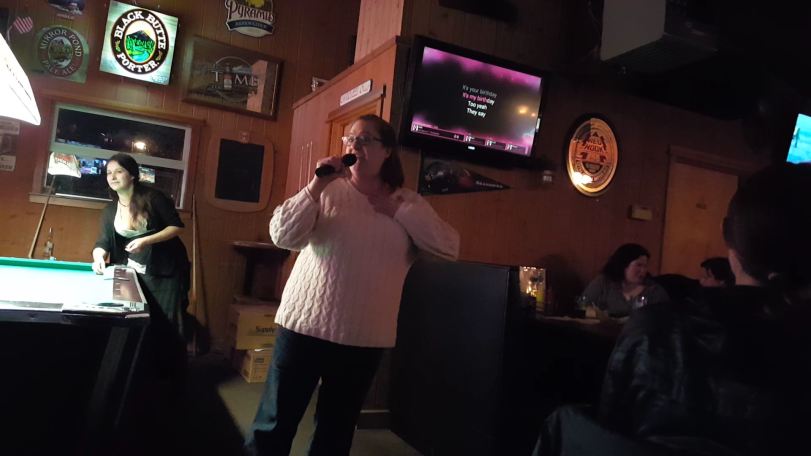 We all sang (and danced) along with the performers and by the end of the evening, our throats were sore and we were ready for bed!

Saturday Morning: we enjoyed another delicious breakfast at the Rosario restaurant.

After breakfast, Chad and I decided to drive/hike up Mount Constitution in Moran State Park. We drove up part way until the road was closed due to ice. From this spot, we took to the trails and hiked 2.2 miles to the summit. 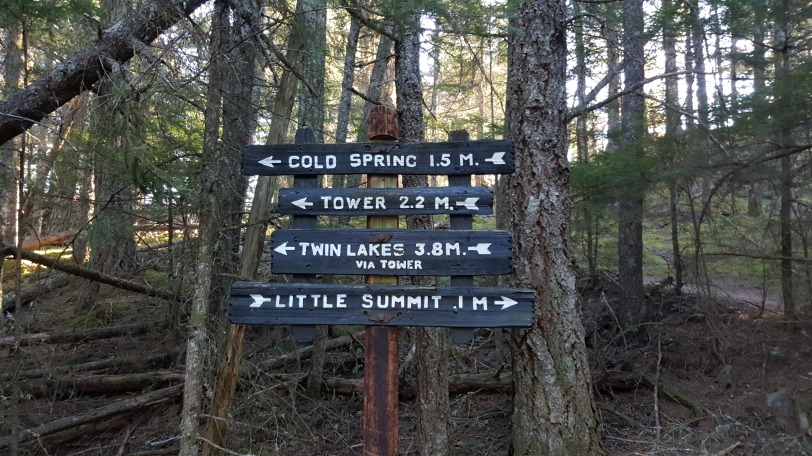 I can’t say enough about the beauty of this hike – it might be my favorite in the state of Washington!

We started on a woodland trail heading to the summit. 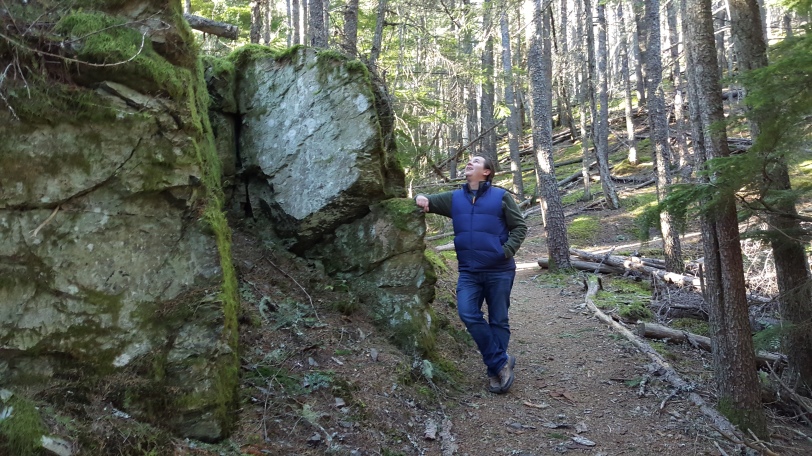 After almost one mile, we caught a glimpse of the Sound and Mount Baker in the distance. 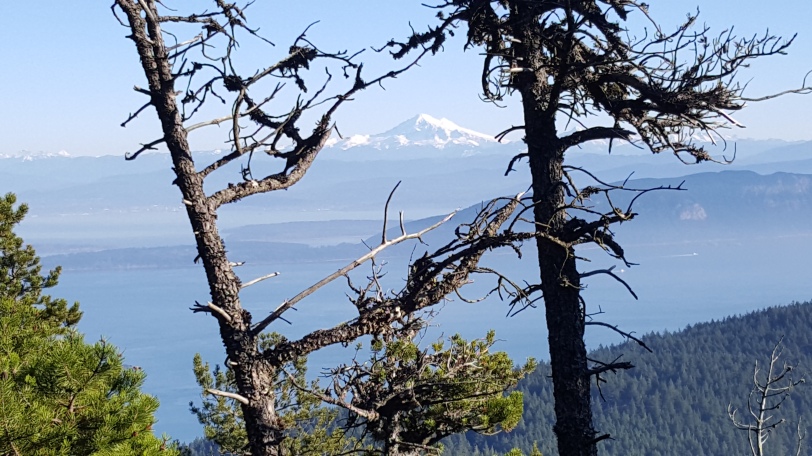 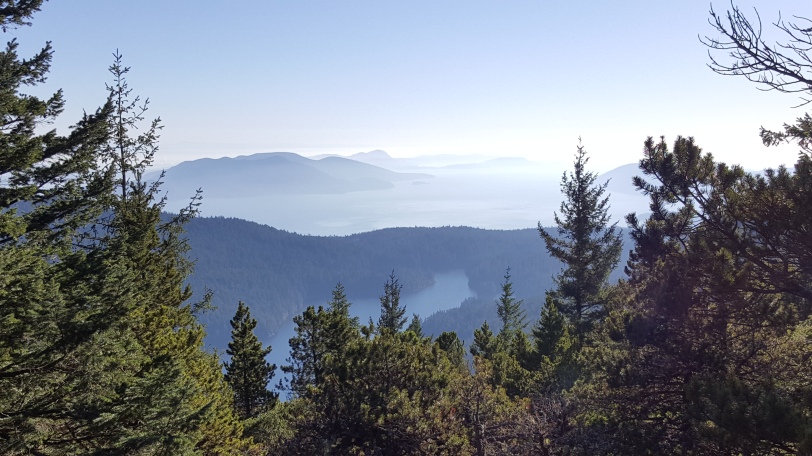 Continuing up the mountain, we traversed some tree-studded valleys and then the trail opened up to amazing views of the Sound, of Mountain Lake below us, and of Mount Baker in front of us. It was breathtaking.

We reached the summit, which at just under 2,400 feet is the highest point on Orcas Island. The views from here are expansive to say the least.

You can view most all of the San Juan Islands, the cities of Bellingham and Anacortes, Mount Baker and various surrounding mountains (on a good day you can see Mt. Rainier – sadly we did not), and Canada.

At the summit, is a stone observation tower which was built by the Civil Conservation Corps in 1936. 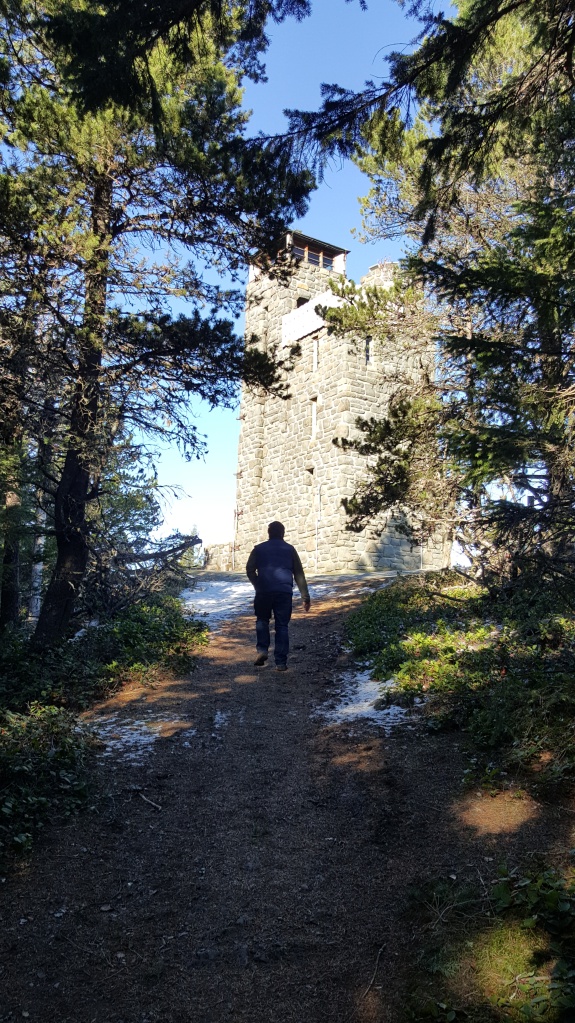 It is a wonderful, 53 foot tall tower featuring the history of Moran State Park and the tower in rooms located on 2 of the stories in the tower.

At the top, you can see Canada (and everything else I’ve mentioned).

Hiking down, we enjoyed more of the wonderful view and ran into Kit and Phillip, following in our footsteps again (literally, LOL), climbing their way to the summit.

Saturday Lunch: We drove into Eastsound for our traditional post-hike beer and burger, which we enjoyed at the Madrona Bar and Grill. 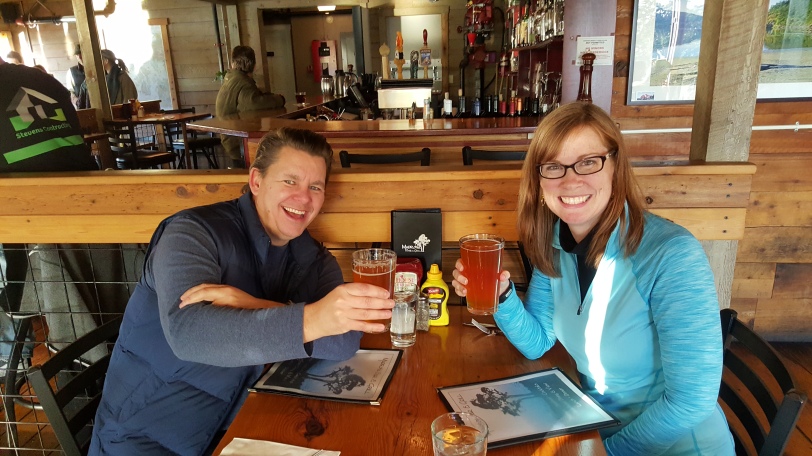 After this late lunch, we drove west towards Deer Harbor. This was the last part of the island for us to explore before catching our evening ferry. En route, we came across a lovely flock of sheep grazing in a field.

At Deer Harbor, there was a small dock at the marina with a market located over the water at the end of the dock. We stopped inside to get Chad a coffee and a soda for me. Leaving the market, we heard a small splash in the water under the dock. We looked down and saw four harbour seals frolicking and feasting on the thousands of small fish in this bay. A French family was also on the dock. We saw their little daughter first and asked her if she saw the seals. She seemed non-plussed. But once she saw them, she exclaimed in French to her family. We realized she hadn’t understood us! But we all understood the cuteness of the seals, who began to put on quite a show for us. It was a spectacular end to our trip!

Saturday Evening: We headed back to the ferry line, enjoying the marvelous sunset along the way. 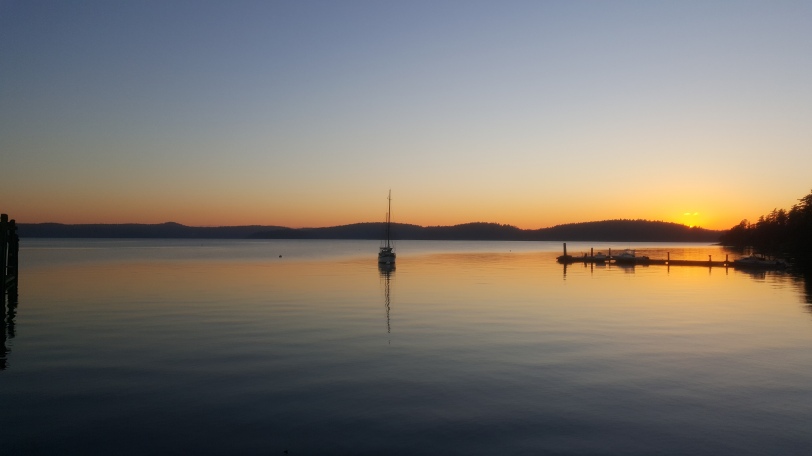 We had plenty to be thankful for including our families, great friends, and this wonderful trip to Orcas Island.

For more about Orcas Island in warmer weather, read about our late summer visit here.

3 thoughts on “48 Hours on Orcas Island: A Storybook Thanksgiving”