Fall has arrived and with it, the bold and subtle colors that overtake most of the trees, bushes and grasses of the PacWest. With our eyes wide open, we ventured back into the grand Cascade Mountains to witness this seasonal metamorphosis. Our destination this time…Lake Valhalla.

The forecast called for rain and as we arrived we had a bit of drizzle, but we tightened our boot laces and headed into the forest, which was surely willing and able to protect us from the elements. 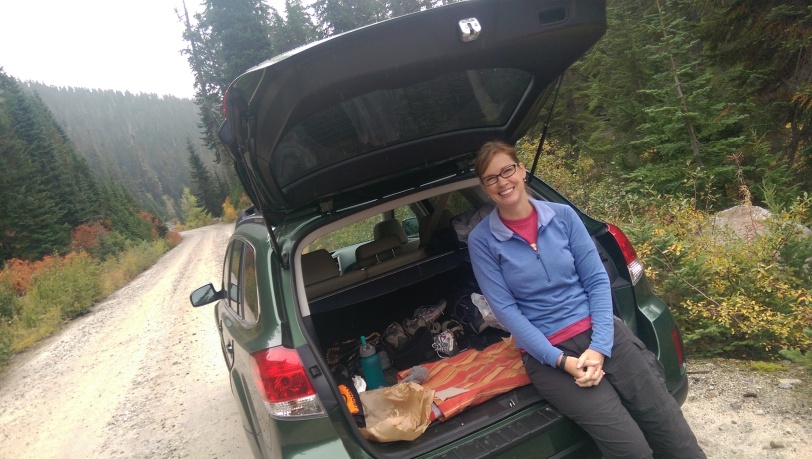 Valhalla, a term from Norse mythology (I will leave it to you to look that one up, it’s quite interesting) is a place of honor, glory and happiness where “heroes slain in battle are received”.  I would not call Susan and I heroes by any stretch, but the journey to this magical lake situated between Lichtenberg Mountain and Mount McCausland certainly was glorious and provoked much happiness from both of us along the way and upon arrival.

We decided to take the Smithbrook trailhead towards the lake.

a tapestry of colors found along the trail and down in the meadows.

Reds, oranges, light and dark greens and bright yellows seem to never end. We actually stopped several times just to take it in and marvel at what was likely the most colorful hike we have been on to date. 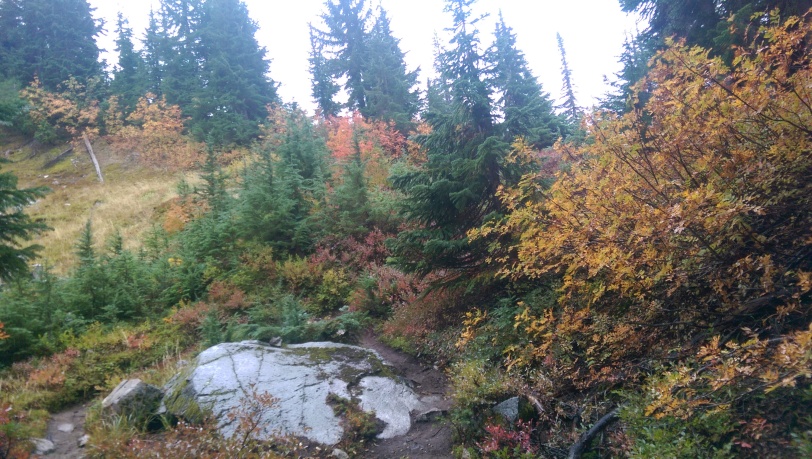 We continued up the Union Gap, ascending another 600 feet. As we made our way towards the lake we were able to view Glacier Peak, an active volcano towering 10,525 feet. Now, anyone who has spent anytime with me will have heard me point out that Glacier Peak, as far as destructibility, is a far greater threat than Mt. Ranier and here’s why:

Glacier peak is 70 miles Northeast of Seattle, 20 miles closer than Mt. Rainier. Similar to Rainier, Glacier Peak is a stratovolcano, a conical shaped volcano with numerous layers of lava, volcanic ash and this naughty stuff called tephra, which is basically chunks of rock and other nasty sharp things that hurt. Another key difference is that Glacier Peak if roughly four thousand feet less in elevation and is the most isolated of all the volcanoes in the Cascade Volcanic Arc. That said, Glacier Peak is a monster, having erupted “violently” (USGS word) five times in the last 3,000 years. That may not seem like a lot, but actually, in Earth history time, it’s the equivalent of saying “see ya tomorrow!”

Glacier Peak and all of the volcanoes in the Cascade Volcanic Arc are constantly unsettled and annoyed by the same culprits, the Pacific Plate that wants to go West and the Juan De Fuca Plate wanting to go East. These two non-besties clash constantly and are responsible for most of the disharmony in the Northern Cascades.

Scientist expect the plates are due for a large shift and when they do, in the words of Ioánnis Phokás, the Greek Maritime pilot known by the Spanish as Juan De Fuca (it’s a long story involving his baptism and him assuming the biblical name “John” or “Juan”), who, while in service to the King of Spain, laid claim to having explored the strait between Washington State and Vancouver Island which is now known as the Strait of Juan De Fuca, it will be “no bueno”.

Unlike Mt Rainier, which will mostly devastate the entire Puyallup Valley leaving Seattle just a little ashy and creating an opening for a new State Fair Ground location, Glacier Peak will send its slurry of mud, debris and meanness down the Skagit River and into the Puget Sound. Alas, a bit more of a wrinkle for us here in Seattle. Oh, that and the fact that the USGS names Glacial Peak as a “very-high-threat volcano with inadequate monitoring”. Currently, only one seismometer was installed on Glacier Peak and it had not “worked in two years”. Anyhoo, back to Lake Valhalla.

We continued past more meadows and ultimately could see the Lake down below. It was an amazing sight that lead us to quickly begin to descend down to the waterfront 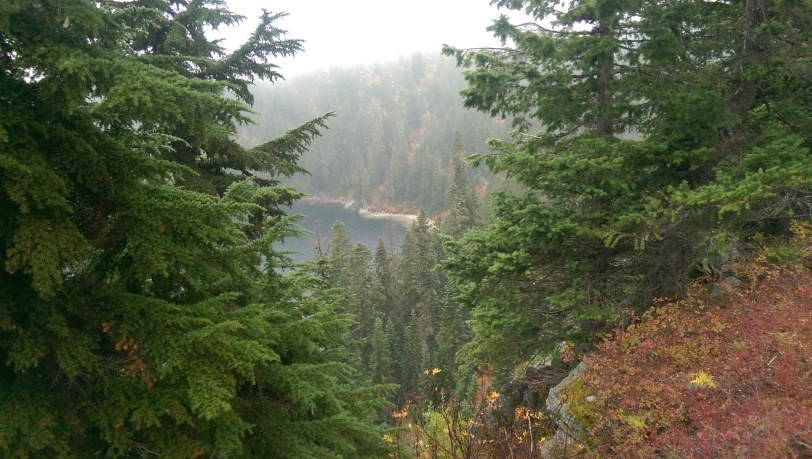 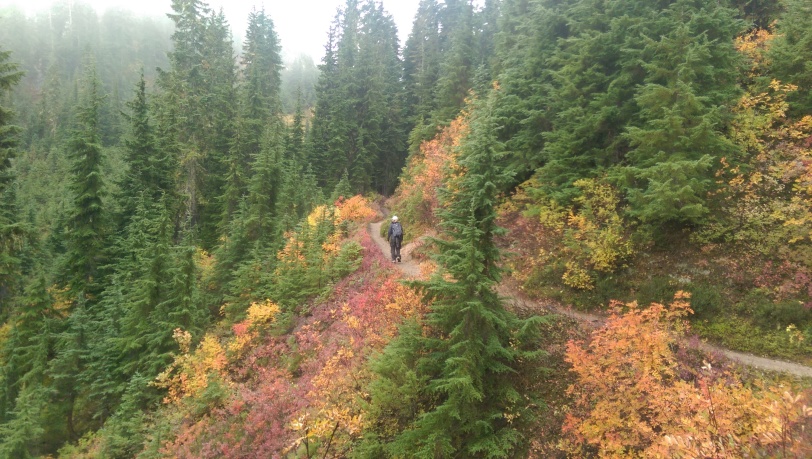 Once near the Lake, the Union Gap trail actually intersects with the Pacific Crest Trail, made famous by the novel Wild. At this point on the PCT, hikers are closing in on their final destination, the Canadian border. Sadly, we were unable to see any of them, similar to our constant quest to find Bigfoot. I digress. 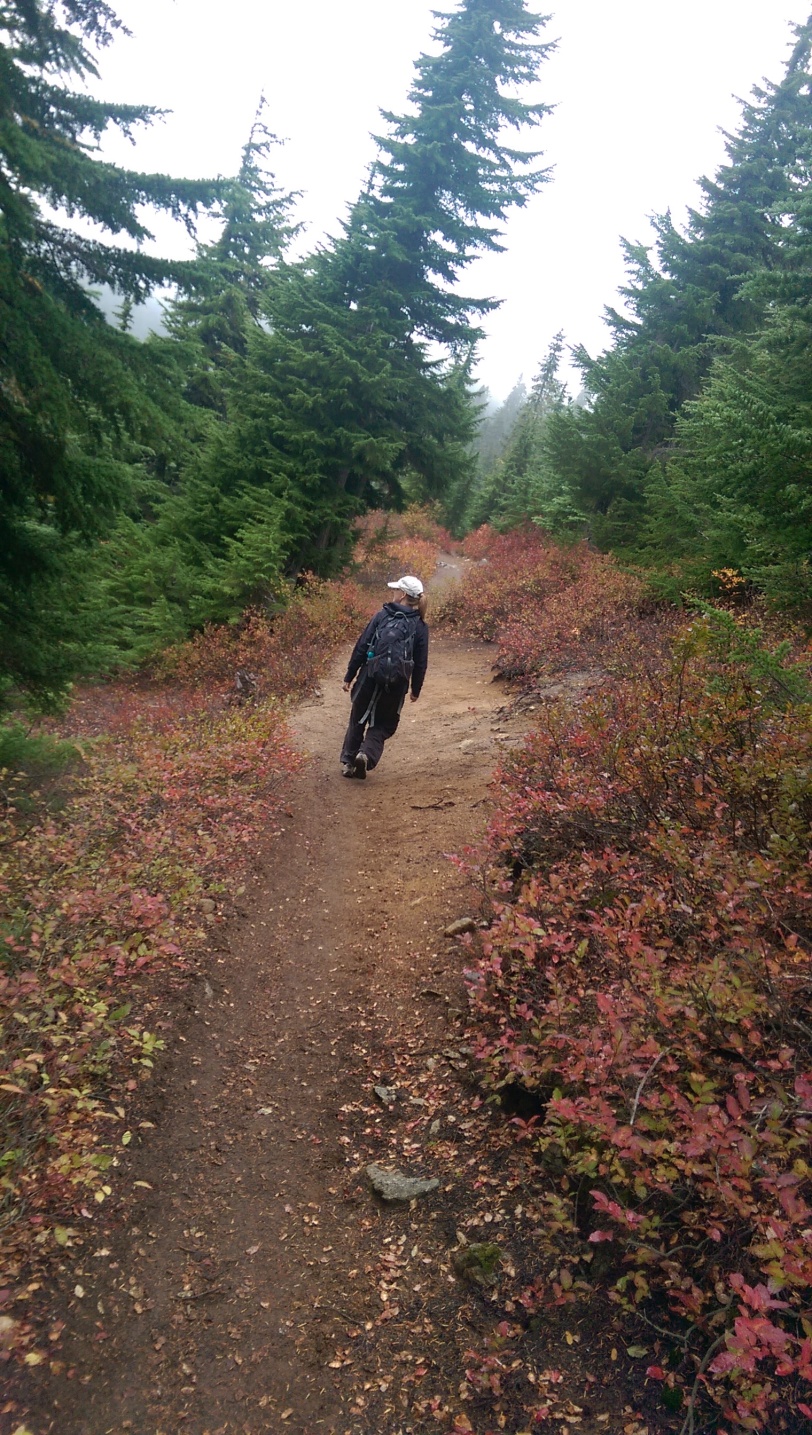 We made our way down to the water, which was incredibly clear, and chatted with some campers who had been fishing for trout.

Then, down to the beach, yes, the beach 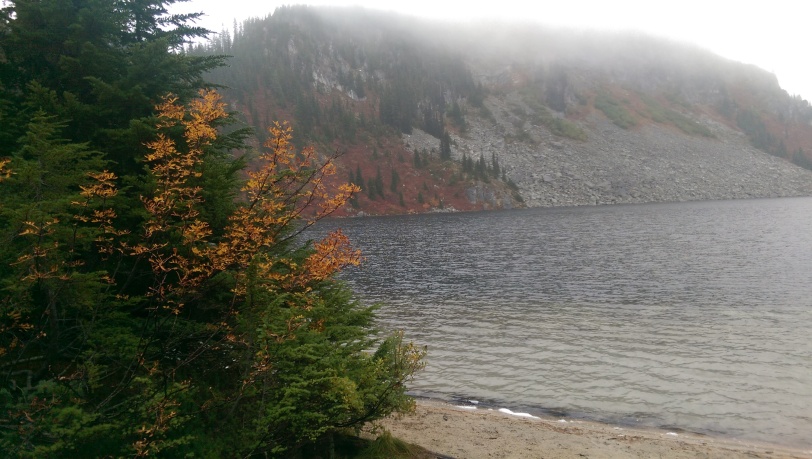 where we decided to get our “Valhalla” on and do some yoga poses.

Susan is a natural.

The view from the base is extraordinary and the hike out was equally as magical.

This is a great day hike but I’m looking forward to setting up camp on the beach and doing a bit of fishing and swimming some weekend.

If you are looking for a magical hike that is challenging in parts, with a very rewarding conclusion, make your way to Lake Valhalla and soak in the happiness.

Directions to the Lake Valhalla Trailhead: From Seattle, drive east on US 2 for about 58 miles through Stevens Pass. About 3.5 miles past Stevens Pass, turn left on Forest Service Road 6700 (be careful crossing westbound traffic on US 2!). Continue on FS Road 6700 for about 2.5 miles to parking and trailhead.

One thought on “Lake Vahalla”