Musselfest 2015 – Enjoying the Fruits of the Sea

Musselfest 2015 was off to a good start this past Saturday with fantastic weather, long lines, and tasty food.

Chad and I had been to Musselfest once before (in 2013) and the event was a cold, rainy, but delicious experience. Buoyed by the forecast this year for spectacular sunny skies and low-60 degree temperatures, we invited our friend William and the three of us headed to Coupeville (on Whidbey Island) early in the day.

Coupeville is a charming historical seaside town in the middle of Whidbey Island. Founded in 1852, Coupeville is the second oldest town in Washington state and is situated on Penn Cove, home of the famous Penn Cove Mussels. Each year, Penn Cove Shellfish Company sponsors Musselfest – a celebration of the fruits of the sea. 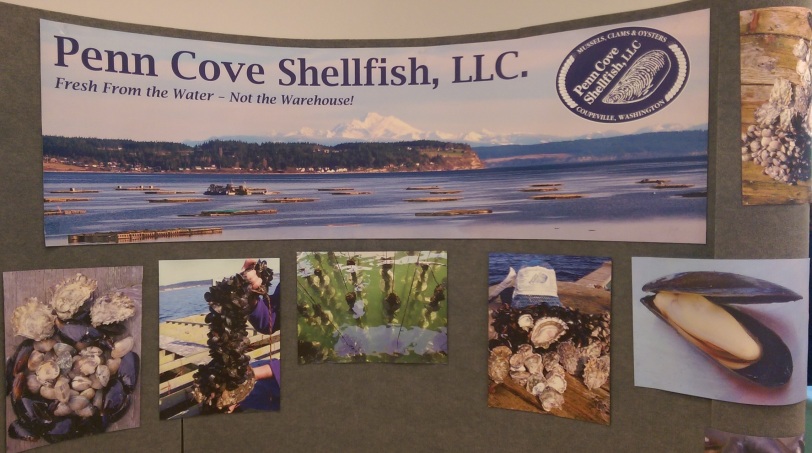 Now in its 29th year, Musselfest has lots to offer, but the main event is the Mussel Chowder Tasting Competition. Thirteen local restaurants prepare different chowder recipes. Participants buy voting cards (with 5 or so restaurants listed per card). We learned our lesson last time to get there early as entire cards can sell out.

The line for Chowder Tasting voting cards at Musselfest.

So this year, we were lucky and were able to get all three voting cards. There would be a lot of chowder in our immediate future.

After purchasing our voting cards and plotting our tasting strategy,

we enjoyed the sounds of this singing group outside Musselfest Headquarters at the Coupeville Rec Hall.

Inside the Rec Hall, throughout the day, were cooking demonstrations.

But we were here to sample the chowders, so we started on the pier just off Front Street and went to Kim’s Café.

Kim’s chowder had a hint of curry and, it turned out, was our favorite of the day. We had to stop along the way to take our obligatory cheesy photos as sea creatures and muscle-man/hula girl (when in Rome – or Coupeville!). 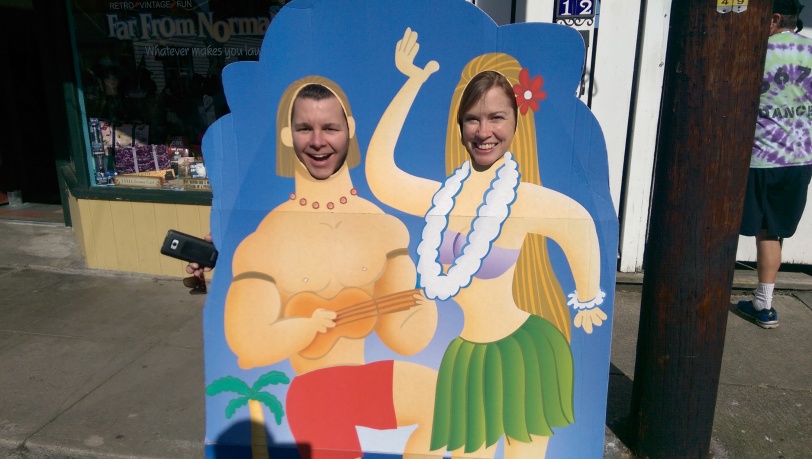 After enjoying Kim’s and the sites from the pier, we headed back to Front Street, where we tasted chowders from The Front Street Grill, Mosquito Fleet Chili, Toby’s Tavern, and The Knead and Feed. 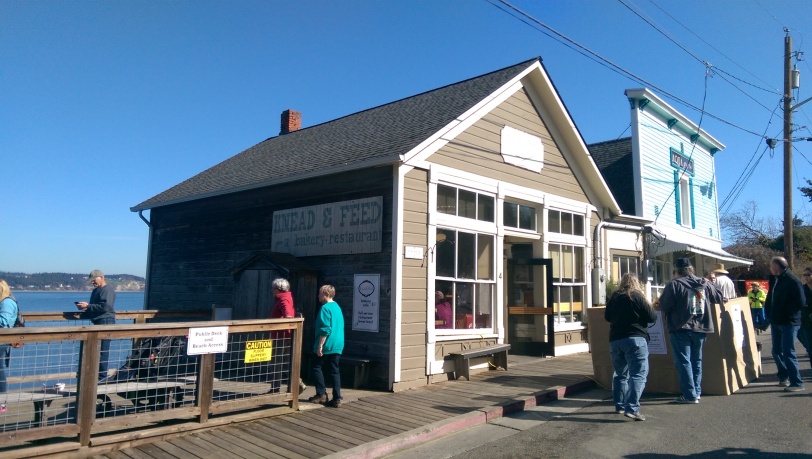 These restaurants took to the street with large vats of mussels and chowders cooking all day. 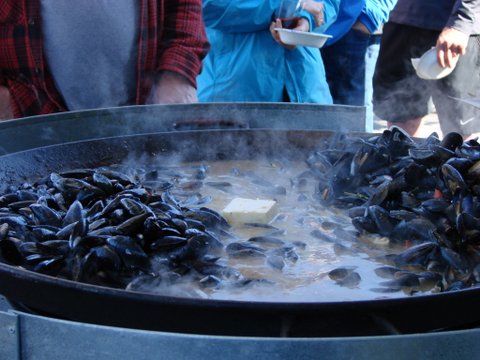 We decided at that point to take a break from Chowder Tasting and enjoy a beer at the Beer Tent. Turns out, they serve mussels in the beer tent, too (they are everywhere!), so we enjoyed a bowl of mussels accompanied by fresh sourdough bread, good for dunking into the garlic and butter broth that settles at the bottom of the bowl. Yum! 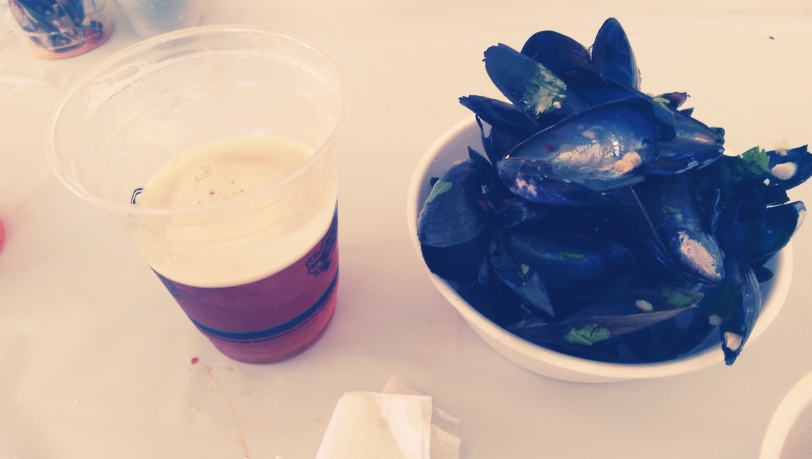 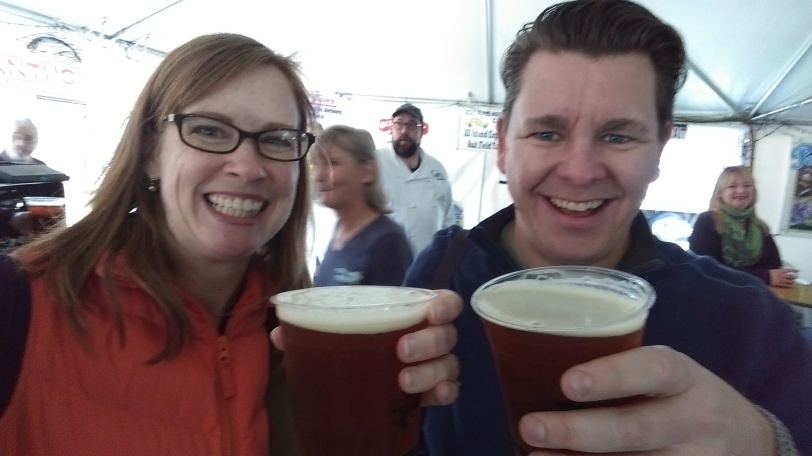 After filling our gullets with mussels and beer, the chowder tasting continued (we took our voting responsibilities seriously!). We sampled chowders from Christopher’s and The Oystercatcher. 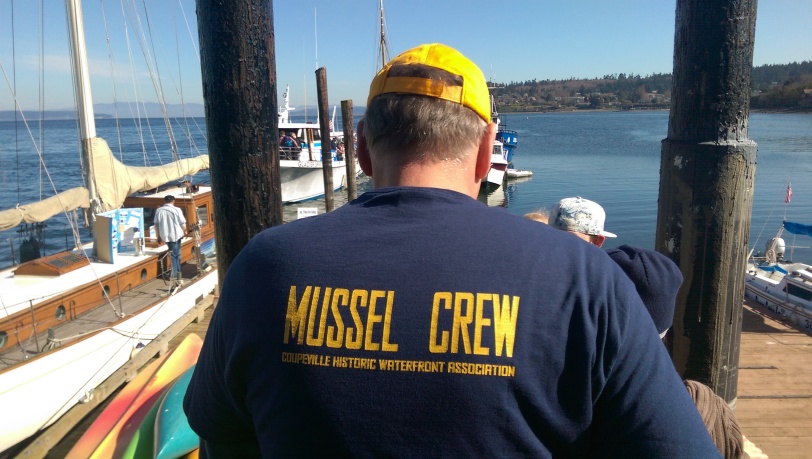 we learned that sadly, they oversold their tickets, so there was no room for us on the tour boat. Perhaps next year, they should charter an additional boat for all the hordes of people that wanted to pay to take this tour! Aside from that flaw, Musselfest was a treat and our chowder sampling was far from over.

Given that it had been a short while since we last ate (it is a food festival, after all), we decided to stop for lunch at Toby’s Tavern.

Toby’s is one of our favorite spots in Coupeville (as we noted previously in our Deception Pass blog post). 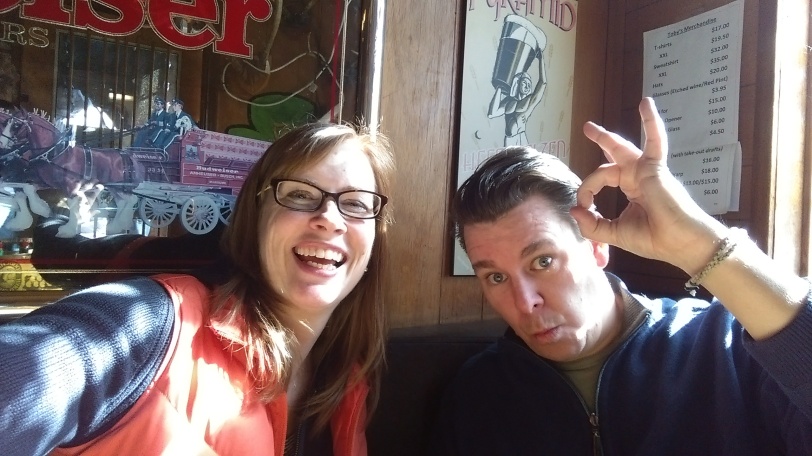 Toby’s is full of character and antiquities from Washington state. Chad’s favorite item is an old 5-man racing hull which hangs from the ceiling.

This boat was crafted by George Pocock, the leading designer and master builder of crew racing hulls from the 1920s through the 1970s, and the man who helped coach the University of Washington Crew Team to win the 1936 Olympics!  (If you haven’t read The Boys in the Boat yet, we highly recommend it.)

The back bar at Toby’s is also a treasure. It was originally built in 1900 in Port Townsend on the Olympic Peninsula and was later brought by boat over to Fort Casey on the western side of Whidbey and then transported to Coupeville. It resided in the Coupeville Hotel, but after a serious fire at the hotel, it was moved to Toby’s.

Mussels are served at Toby’s in pound allotments.

You can select from one or two pounds. Chad and I enjoyed shared a grilled cheese and a pound of freshly harvested Penn Cove Mussels (we stuck with the theme of the day). William was perhaps musseled-out, so he went with a cheeseburger.

After lunch, we got in our car and drove to the other restaurants offering chowder tastings. We stopped at Ciao and Brett’s Bread (their chowder was topped with a delicious biscuit from their bakery). We then crossed over the highway to sample from Coupeville Coffee & Bistro (delicious!) and The Pizza Factory. The clock struck 3:30, so sadly we weren’t able to taste from The Tyee down the street.

The last participating restaurant on our cards was Captain Whidbey Inn. We knew it was a longshot that they would still be offering tastings, but we decided to venture the 2 miles west to the Inn to at least see the historic inn and perhaps have a drink. We were glad we did.

True, they had stopped serving chowder tastings, but we ordered a drink, enjoyed the log-cabin feel of Judge Still’s Tavern,

and then brought our drinks out to the deck at the Inn, which overlooks Penn Cove. 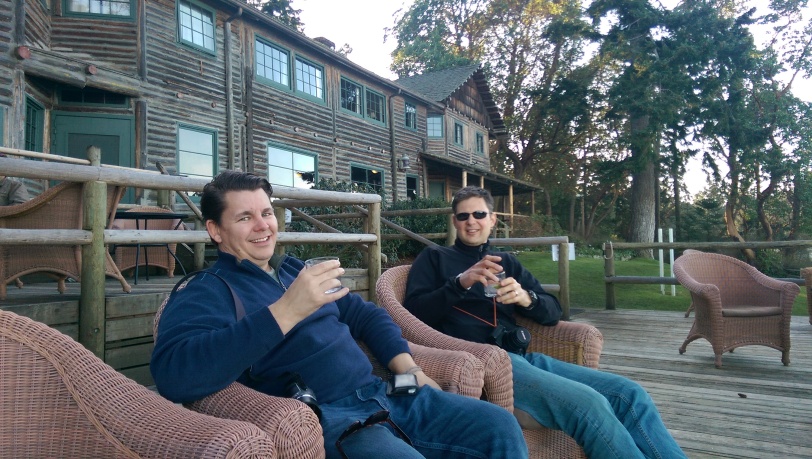 With Mount Baker off to our right and the sun starting to slowly set, we took in the quiet stillness of the cove and the beauty that was everywhere around us. 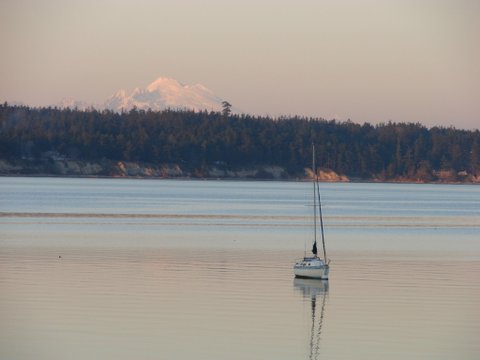 We have since learned that the victor of Chowder Tasting Contest this year was …The Captain Whidbey Inn!  (If only we had arrived a few minutes earlier to sample some chowder!)

A few activities we missed at Musselfest were the art walk (later in the evening) and the mussel-eating competition, where brave souls had to shuck and eat three – 16 ounce cups full of mussels as fast as they could (apparently a Canadian won the title this year!). The 5th Annual “Mussels in the Kettles” Mountain Bike Poker Ride and Children “Fishin off the Pier” were also events to enjoy at Musselfest.

There is much to do here and much more to eat! So if you plan to come next year (and we recommend you do) arrive early and bring your love of the sea and your appetite!

This year, Musselfest was March 6-8. Check their website (http://thepenncovemusselsfestival.com/) for next year’s dates.

Admission:  Free! However Chowder Tasting Voting Cards are $5 for a card of 5-6 restaurants.

– Take I-5 North to exit 182 toward Mukilteo
– Slight right onto Washington 525
– Continue on to SR 525 – Ferry Lanes
– Take the Clinton-Mukilteo ferry to Clinton (Whidbey Island)
– Continue onto SR 20 E toward Coupeville
– At Coupeville overpass, take a right onto Main Street
– Continue toward Coupeville’s historic downtown waterfront
– Take left onto Coveland
– MusselFest Headquarters will be on your right (901 NW Alexander St)

2 thoughts on “Musselfest 2015 – Enjoying the Fruits of the Sea”