Mt. Baker and Mt. Shuksan: A Tale of Two Mountains

Saturday at 8:15 am, Susan and I were waiting in our car at the stoplight at Mercer and 5th Avenue N, eating our Einstein’s bagels, powering up for what would be a long day in and around Mount Baker. The car next to us with two guys suddenly rolled down its window.

“Are you guys going hiking?” the driver asked us.

“Yes, we are!” we enthusiastically responded.

The driver replied, “So are we!”

“Great! Where are you going?”

“Awesome. You guys be safe and enjoy!” the driver said before we both pulled away once the light changed.

Susan and I were bemused. Only in Pac West, would someone greet you with the question “Are you guys going hiking?”  Not in Chicago, that’s for sure.

We were so delighted by the enthusiasm of the other hikers and their camaraderie with us as hikers and lovers of the outdoors – this encounter set the tone for a great day.

The weather was perfect, with clear blue skies as we drove up I-5 and then east on the Mount Baker Highway towards Artist’s Point. After a quick stop at the rangers outpost to check on conditions (something I always advise, even this late in the season), we grabbed a couple new trail maps and continued towards Baker. 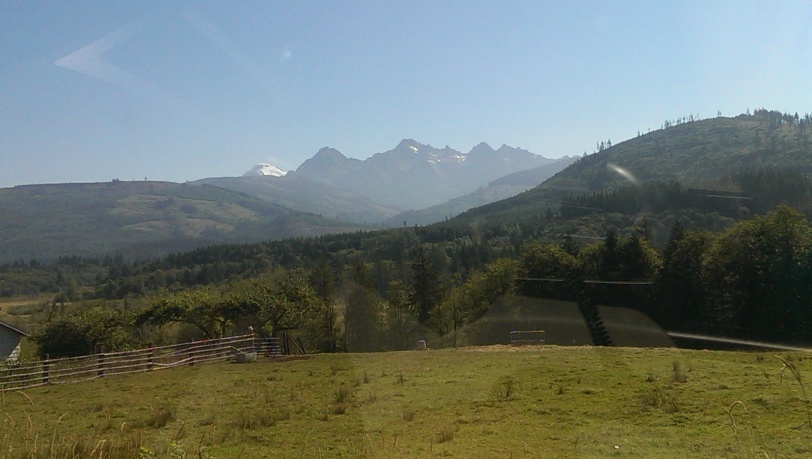 Driving up Mt. Baker Highway (Highway 542), we head towards the end of 542, the parking lot and visitor’s center at Artist Point.

The drive up is the first amazing part of this day (aside from the cheerful exchange with the fellow hikers on Mercer Ave.).  A little narrow and a little daunting at times, it’s simply gorgeous and it made me once again admire the men who build these roads long ago. 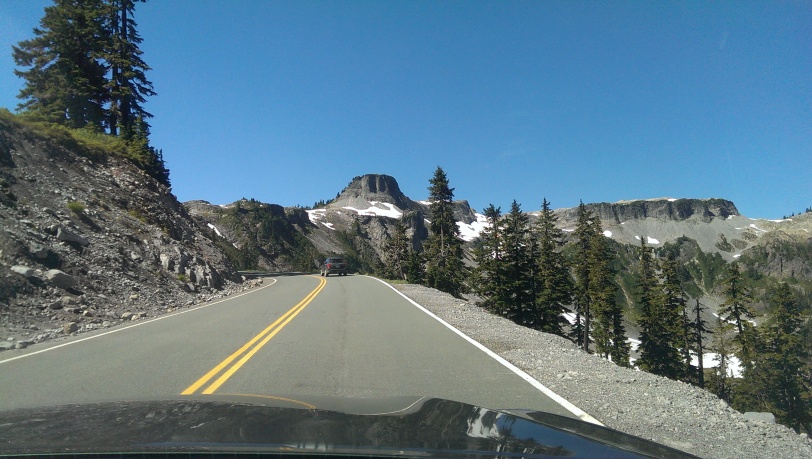 Having parked and booted up, Susan and I quickly made our way up onto the Artist Point trail. This trail is very moderate, more of a good walk. We walked up and down slight hills, past numerous outlooks where both Mt. Baker and Mt Shuksan can be seen. It’s a truly amazing site to see these two wonders of nature, side by side.

Mt. Baker, rising to an amazing 10,781 ft (3,286 m), is a stunner. The third highest peak in Washington state and the second most thermally active crater next to Mt. St. Helens, Baker is likely one of my favorites. Whether viewing her from Queen Anne, West Seattle or Canada (only 10 miles north of Baker), I can never get enough of this quiet lady. 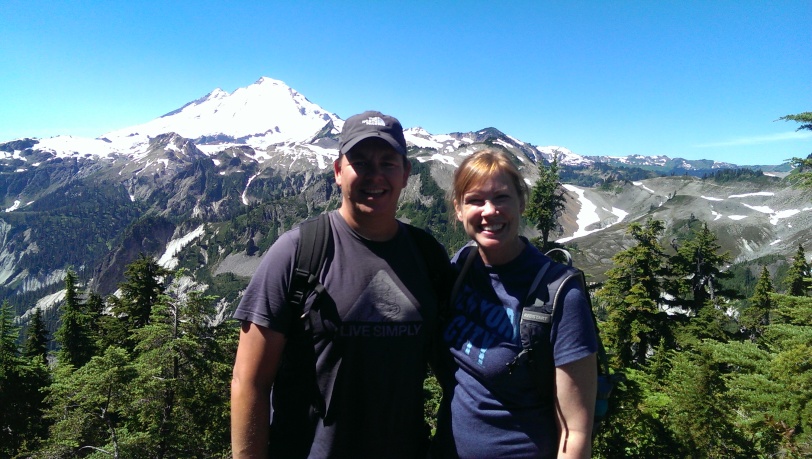 A glaciated andesitic stratovolcano, like many others in the Cascade Mountain range (yea, I’m looking at you Mt. Rainier), Mt. Baker is actually the youngest volcano in the Mt. Baker volcano field, at roughly 1.5M years old, though the current glaciated cone is estimated to be a mere 140,000 years old. Somehow, even though it’s the youngest, Mt. Baker obtained the naming rights to the entire area, much like Safeco Field. I digress.

The Mt. Baker area has two ski areas, which makes some sense since its one of the snowiest places in the world. In 1999, Mt. Baker got a total of 1,140 inches of snow, oddly, the same amount of snow fell on Chicago the winter that preceded our speedy departure. Kidding! Not far off though. 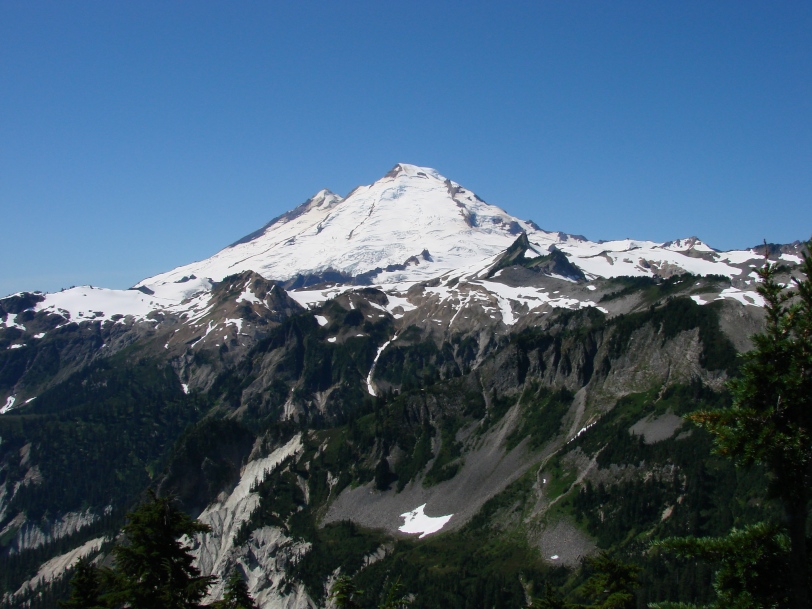 The massive glaciers that drape down the length of the mountain can be viewed from the Artist Point hike. Named for Third Lieutenant Joseph Baker (yes, third lieutenant), by British explorer George Vancouver (names are starting to click now, huh?), when he and his crew reached the Pacific Northwest coast in 1792. Lieutenant Baker made an interesting observation to Mr. Vancouver. His words and descriptive prose struck a chord with George Vancouver, enough to disregard all the native names preassigned to the mountain and now, well, we have our Mt. Baker. : )

Not to be outdone, Baker’s neighbor, Mt. Shuksan derives its name from the Lummi Tribe word for “high peak”. Sonny to its Cher, Paul to its John, it is not. Shuksan holds it own reaching 9,131 ft (2,783m) with two towering peaks (Nooksack Tower and Hourglass), four waterfalls and massive glaciers with enormous faults and flexures (bad things to fall into), that can be seen from the valley below. Mt. Shuksan is over 120 million years old. See my point about the naming of the volcanic field. Again, I blame Mr. Vancouver (teasing). 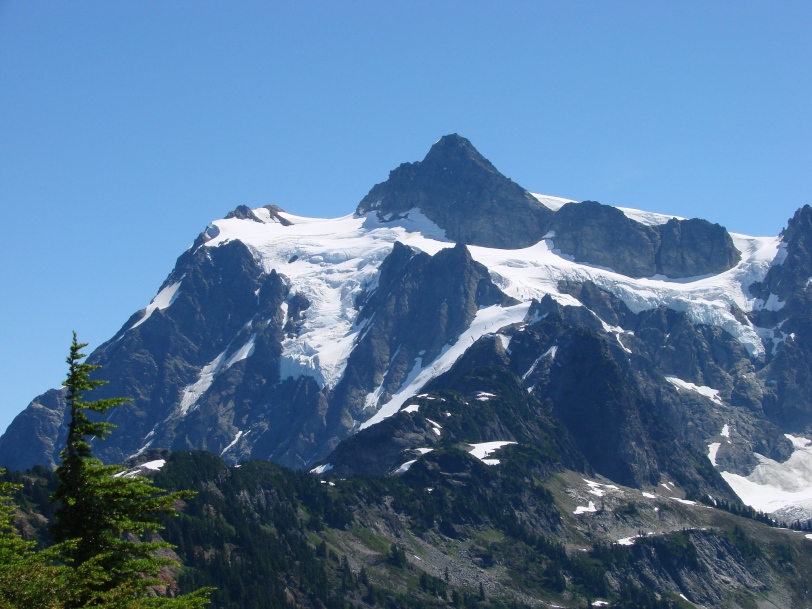 Close up of the massive glacier

Susan and I made our way up the trail, with both mountains in our field of view. It’s amazing to see these two so close to each other, parted only by lush green valleys and Mt. Baker Lake to the south, a popular spot we intend to visit on our next journey.

After taking in the sites, shaking our heads in amazement, encountering some left over snow, including a rather large patch enjoyed by some local kids getting in some early August sledding, we made our way back to the parking lot. We arrived and were greeted by an impromptu classic car show. My worlds collided. Mountains, classic cars…the only thing missing was some sort of furry animal. 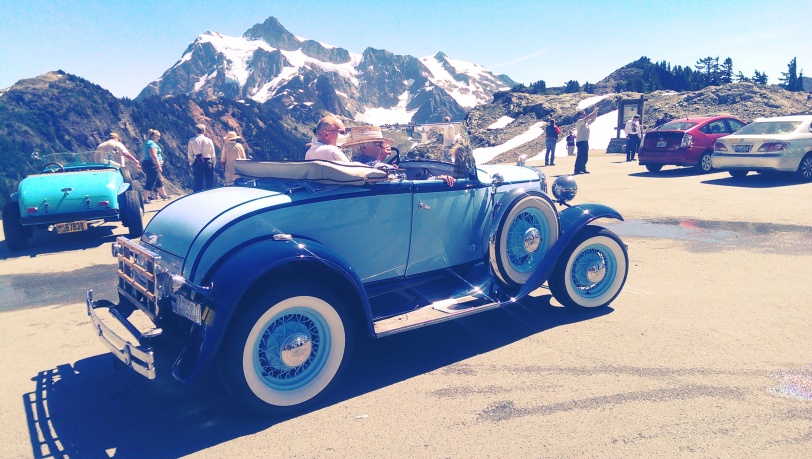 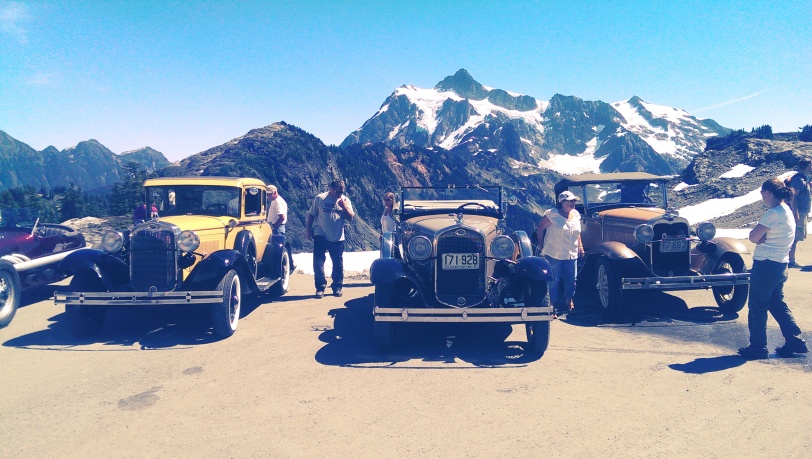 Having hiked about 2 miles, Susan and I decided we need more and descended the mountain a bit in the car to hike the valley trail leading toward Bagley Lakes.

This hike, also fairly moderate, great for a family or someone wanting a very casual hike, perhaps with animals. A little over 2 miles roundtrip, with a heart pounding 150 feet elevation gain (wink) this hike is well worth it because of its aesthetic.

Starting near Heather Meadows, the hike leads you down a trail that runs parallel to the creek that empties into a crystal blue alpine lake.

We made our way past snow remnants that create trickles of water and moist ground that supports an amazing tapestry of wildflowers that guide you along the entire hike. Heliotropes, Lupine, Indian Paintbrush and Asters dot the entire valley. It’s a remarkable site that should not be missed and best seen in late August/early September.

We made it to the lake and it looked so good that I followed the lead of a fellow hiker and jumped in, well, walked in slowly, screaming on the inside. As this lake is mostly fed by snow, year round, its colder than most. But, you only live once I always say.

Oh my. I’m as pale as the glacier.

Having fully immersed my body and satisfied the taunts of the onlookers, I made my way out and air dried. The water was amazing. It’s truly a paradise.

We made our way back, chatted with hikers heading out and eventually ended up at the car, happy about the second act we had just concluded. 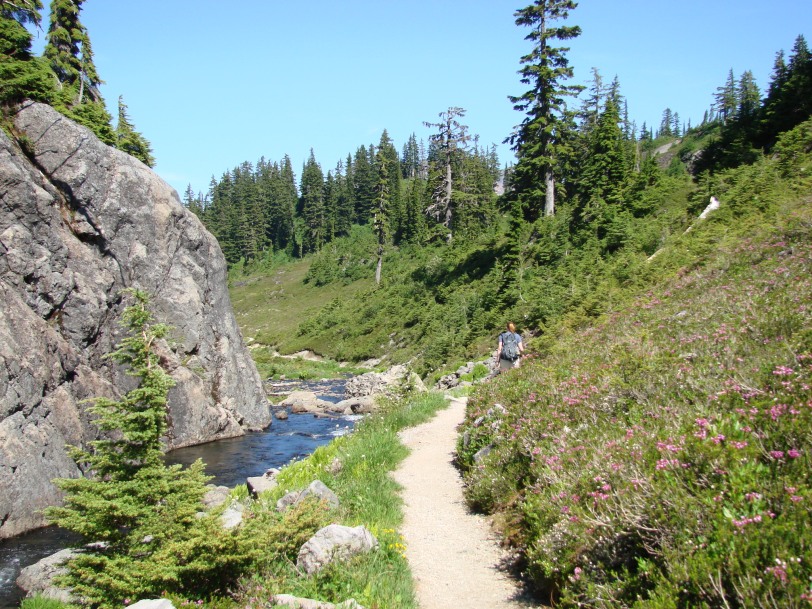 Now, having hiked roughly 5 miles and having jumped into a very cold alpine lake, I convinced Susan (it did not take much) that we needed to stop at Chair 9 Pizza and Bar in Glacier, WA for a cold beer and the best nachos I’ve ever had. You pick your toppings and they cook it in their wood-fired oven like a pizza… enough said. 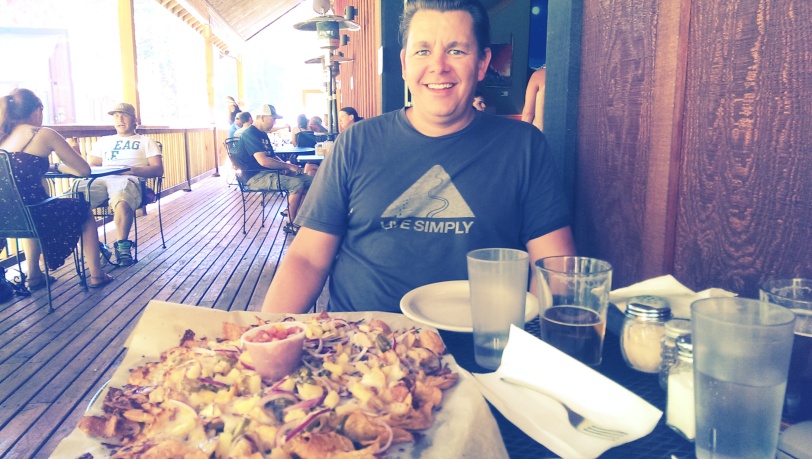 Everything is great at this very unique and very ski/snowboarder outpost. Just my type of place. A wonderful and much deserved end to our day and what a day it was.

2 thoughts on “Mt. Baker and Mt. Shuksan: A Tale of Two Mountains”