Seafair Weekend is finally here and we have been enjoying it full throttle!  Seafair Weekend offers those of us who love the roar of jet aircraft an incredible and LOUD final farewell…until next year.

You may have read about Seafair, the summer festival that dominates Seattle, in our post Seattle Seafair Pirates Land on Alki Beach. Designed in 1950 to attract tourists and put Seattle on the map as the “boating capital of the world,” Seafair today is a series of neighborhood events, including parades, a milk-carton derby, and a triathalon, culminating in “Seafair Weekend,”

When I was growing up in Northern California, I was an airplane junkie… really. I went to so many airshows, fly-ins (see Fun at the Arlington Fly-in) and anything where I could hear the roar of a jet engine.  Seattle’s Seafair does not disappoint and for those locals who have attended in the past or those who will attend next year, it’s a show not to be missed.

Susan and I were lucky enough to be invited out on an Argosy Boat today which brought us right up to the action. After motoring past the 520 bridge, our captain adeptly settled us right in the middle of the the mass of boats all preparing for their need for speed. Thanks Goose!

First to fly over were The Patriots, a group of pilots flying L-39 Albatross jets. What a name for a jet, huh? All kidding aside, the crowd loved these guys and I loved seeing these jets, which date back decades and are still flying.

Once the L-39’s departed, we were greeted by an array of helicopters, starting with two Chinooks that flew past and then hovered over us, rotors blazing.

Once out of sight, they were quickly followed by two MH-60S Knighthawks. One was actually being refueled in flight by a C-130. 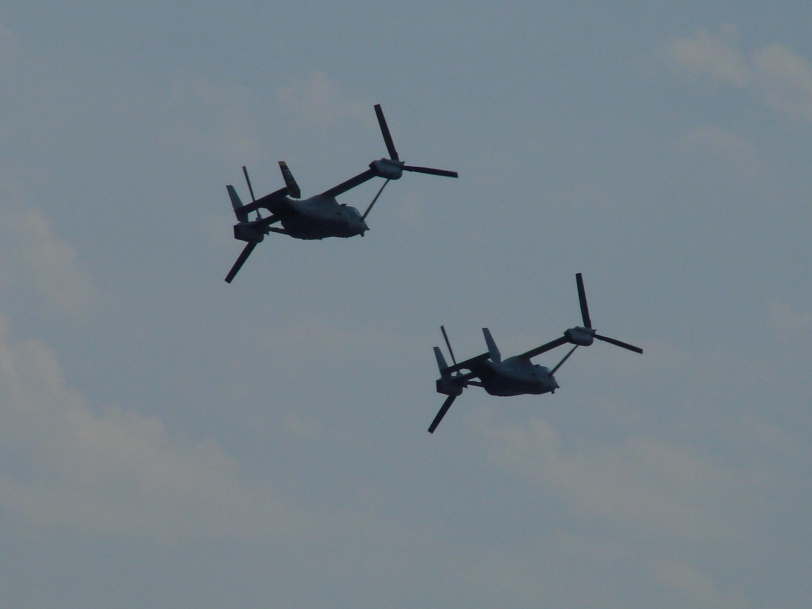 The Osprey, an airplane that can take off vertically like a helicopter (any self respecting airplane nerd knows this) is able to fly like a normal fixed winged airplane while being able to take off from anywhere. This ability was in full display today as one of the Ospreys circled, flying normally while the other hovered above the crowd.

This part of the show culminated in all of these aircraft doing a flyby in formation. What a way to end their demonstration.

We bid these amazing pilots adieu and waited… Lake Washington, having been choppy all afternoon, began to calm as the choppiness and rumbling of the water was soon overtaken by the rocky anticipation felt by all those on the lake as they awaited the next and final act.

The clock  neared 1:40, the time when the angels of the sky were to begin. Then, off in the distance, it began. A spot of darkness that slowly grew, larger…then suddenly took shape, the shape of a triangle…the shape of precision…precision only achievable by the BLUE ANGELS. 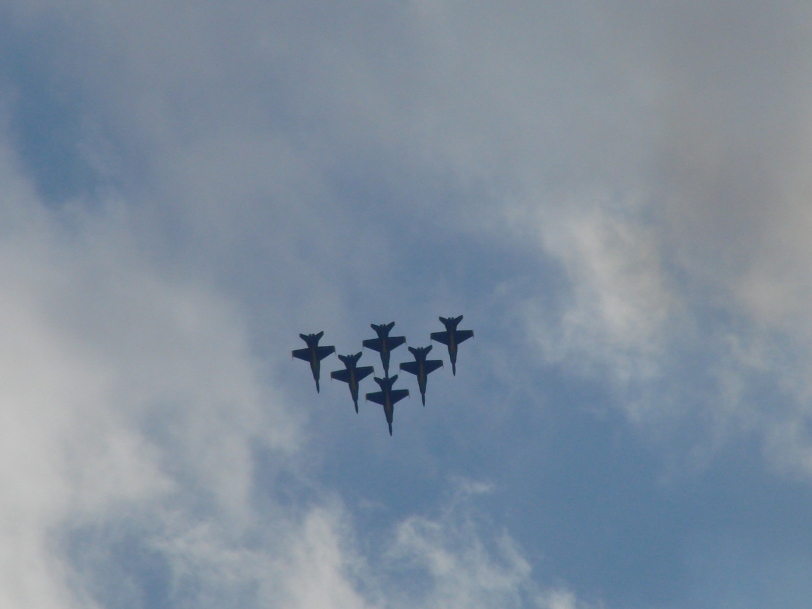 As I took in the sight that had become so familiar to me over the past 30 years, I started to become excited. A potion of Americana, patriotism and pride enveloped my body as the team turned towards the boat, white smoke pouring from the rear of each jet, painting the sky as a cake artisan would script a cake.

They made their first pass together… then…the split occurred. Four together, two on their own. Now, having countless hours of airshow/Blue Angels experience, I have learned that sometimes, looking behind you is the best policy. 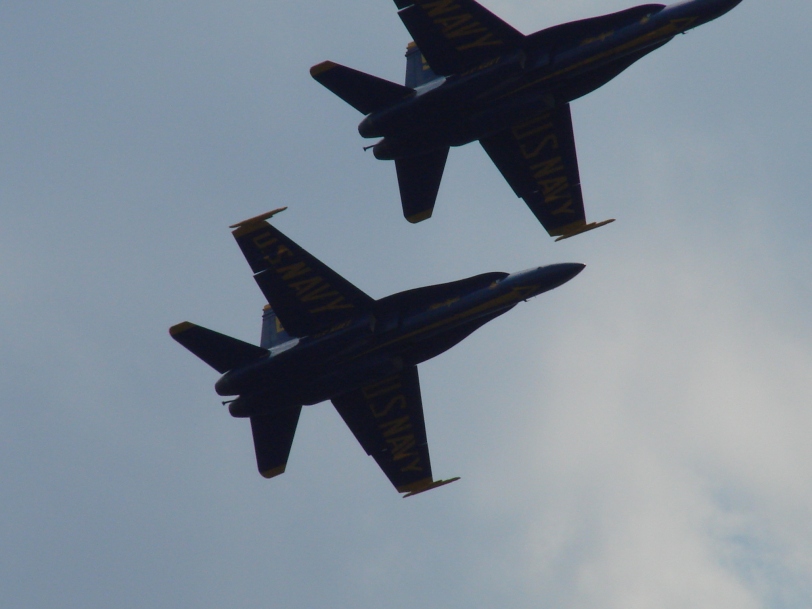 The majestic Cascade mountain range and the sparkle of Lake Washington provided the ideal backdrop for the show. The boat swayed a bit as our adept Captain kept us position to see the show. Suddenly from behind (shocker), one of the singles, as they are called, buzzed our boat, eliciting a chorus of “oooaaah” and “awwws” I’ve grown to expect at airshows. I turned to Susan and said, ” I can listen to this all day,” pertaining to the sound of the  two General Electric engines as they roared, pushing the F-18 higher into the air. 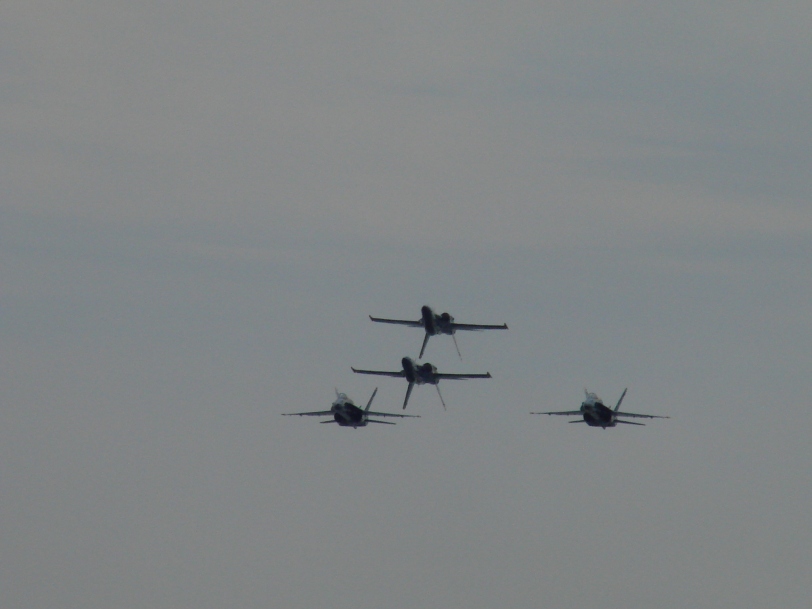 The team performed flawlessly. Though, what else should we expect? They performed the Fountain, high speed passes, barrel rolls and a variety of formation flying, some of which included two of four planes being inverted. Really?

Regardless of whether you love this stuff or view it as unneeded noise, you can’t escape the fact that these jets and the men and women who keep them flying represent the best of this country. Its represents a moment in our day where together, regardless of anything, we are one. 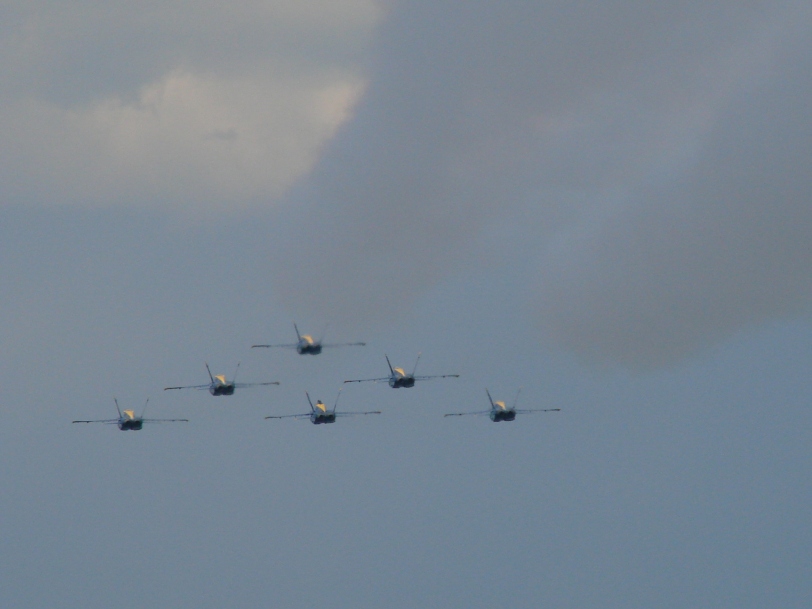