Cle Elum and Roslyn – Keeping Up With the Joneses

Shortly after moving to Seattle, Chad and I decided to take a walk in Lincoln Park (located in West Seattle). We quickly fell in love with Lincoln Park because of its many woodland trails, picnic and play areas, incredible views of the sound atop the bluff which leads down to a marvelous mile-long promenade along the beach.

This particular day was spectacular for February – sunny and close to 60 degrees. (We were not missing the negative wind-chills of the midwest!)

Many people were out enjoying the great weather and several groups of people congregated on the beach to watch a seal fishing for steelhead about ¼ mile offshore.

This was my first non-aquarium seal sighting, so Chad and I sat on a bench, broke out our picnic lunch and enjoyed watching this beautiful creature swimming to and fro in search of fish (who knew we’d have a show with our meal?!). We spoke with various passersby who were just as excited as we were to see a seal in action. One such spectator was a lovely woman named Kristin Jones. She was at the beach with her husband Jim and their dog Nickel. Jim was down the beach talking with some fishermen (what’s good for the seal is good for the fishermen) while Kristin and Nickel watched the seal with interest. Well Nickel was really watching our sandwiches with interest…. Observing this beautiful golden retriever, Chad asked Kristin “Is  your dog missing its tail?” Sheepishly, Kristin admitted that Nickel lost his tail when his former owner (her father) ran it over years ago. After breaking ground with this crazy observation, a friendship was born.

We soon learned that beyond sharing the burden of incredibly common last names, that the Joneses love outdoor adventures as much as the Smiths do. Over the past two years of knowing them, we have enjoyed various outings with Kristin and Jim – kayaking, hiking, and dining. There are some things you need to know about the Jones:  they are very tall with very long legs and they are very athletic (Kristin attends spin class or boot camp every morning at 6:00 am and Jim is an avid skier/hiker/kayaker). I’m going to admit right now I only attend the gym three days a week (on a good week!) and all this outdoor activity is relatively new to me (hiking in the midwest consists of walking on very flat sidewalks). So when we see Kristin and Jim, I’m literally trying to keep up with the Joneses.

Kristin and Jim have a weekend home in Cle Elum, Washington, a historic mining town located just east of the Snolquamie Pass in the foothills of the Cascade Mountains. Because the Cascades are finally getting snowfall this year, we recently spent the weekend out there for two days of winter playground fun. We rented cross-country skis and then skied the Coal Mines Trail between Cle Elum and neighboring Roslyn. 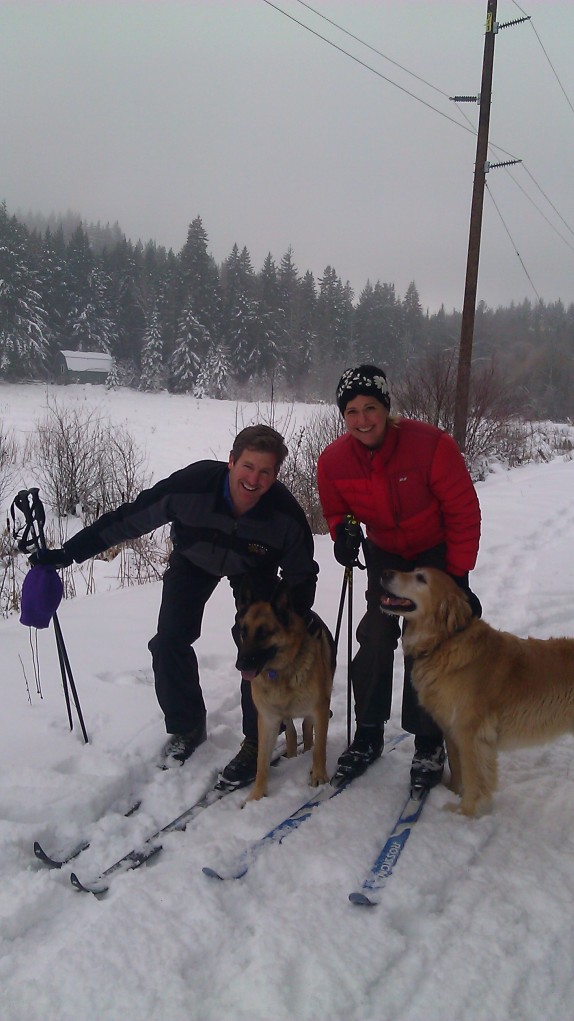 Jim and Kristin Jones with Cheyenne and Nickel

The Coal Mines Trail follows a former Northern Pacific Railroad track (now a bike path) between Cle Elum, Roslyn, and Ronald, Washington. Northern Pacific RR created the track in 1886-1887 to transport coal and people between these three towns. In 1987 the railroad tracks were removed, and in 1994 the route was preserved as a historical walk and interpretive trail complete with signs marking old mine locations. In the winter, it is a wonderful path for cross-country skiers and snowmobilers. The path is lined with maples, pines and fir trees and evokes images of a Currier & Ives Christmas print.

The route between Cle Elum and Roslyn is about 3.2 miles (wait up Joneses!) and is rich with history. The interpretive signs tell of the coal miners, their lives and their settlements along the trail. Remnants of coal mines can be seen along the trail. We saw the sign for Mine No. 1 which was the site of the worst coal mine disaster in Washington State (45 men were killed in an explosion at this mine in 1892).

Though it is considered an “easy” trail (and really, it is), the Joneses don’t believe in slow-going. Being a first-time cross-country skier, I was definitely working up a sweat on this short route – although I appreciated the workout.

Trying to Keep Up

We had all worked up an appetite and so we stopped for lunch at the Brick in Roslyn. The Brick, located at 100 West Pennsylvania Avenue in Roslyn, is Washington’s oldest, continuously operating bar, established in 1889. 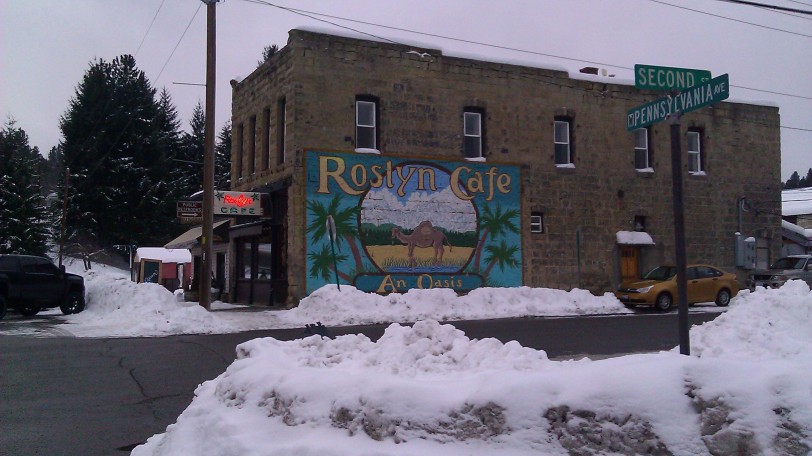 I Keep Expecting the Moose From Northern Exposure to Walk By

Check out the spittoon at the base of the bar!

The Brick’s gorgeous wooden bar is over 100 years old and features a spittoon! Today, The Brick features delicious food, a great selection of beer, and live music on the weekends. (I highly recommend the buffalo chicken salad or the blue cheese and grilled onion burger!)

The whole town of Roslyn is a little slice of history: between 1886-1929 workers came to Roslyn from Croatia, Serbia, Poland, Germany, Italy, Slovenia, England, Ireland, Scotland and Wales to work in the town’s rich coal mines. Roslyn quickly became a “company town” where life revolved around the mining of coal. While the last mine closed in 1963, Roslyn did not disappear. It became home to artists and outdoor enthusiasts and in 1978, the town was designated as a National Historic Landmark. (On a more contemporary note, Roslyn was featured in the 1990’s tv show “Northern Exposure” as the fictional town of Cicely, Alaska).

I Keep Expecting the Moose From Northern Exposure to Walk By

I was still tuckered after lunch (and a little sleepy after my buffalo chicken salad and beer!), so I was thankful I could drive back to Cle Elum from Roslyn while Chad joined Kristin and Jim for the return ski trip. Chad sure got a workout doing a round trip on the Coal Mine Trail!

We all had such a great time, we decided to ski again the next day. This time, we chose the Iron Horse Trail which is a rails-to-trail of what was once the Chicago, Milwaukee, St. Paul and Pacific Railroad track. We left from the Old Depot in Cle Elum and skied about a mile and a half west on this trail before returning back to the Depot. It was so beautiful with fresh powder on the trail, fir trees lining the route, a quaint B&B in the distance (The Iron Horse Inn B&B). There were only two or three other people on the trail that morning, so it was a serene and peaceful hike. 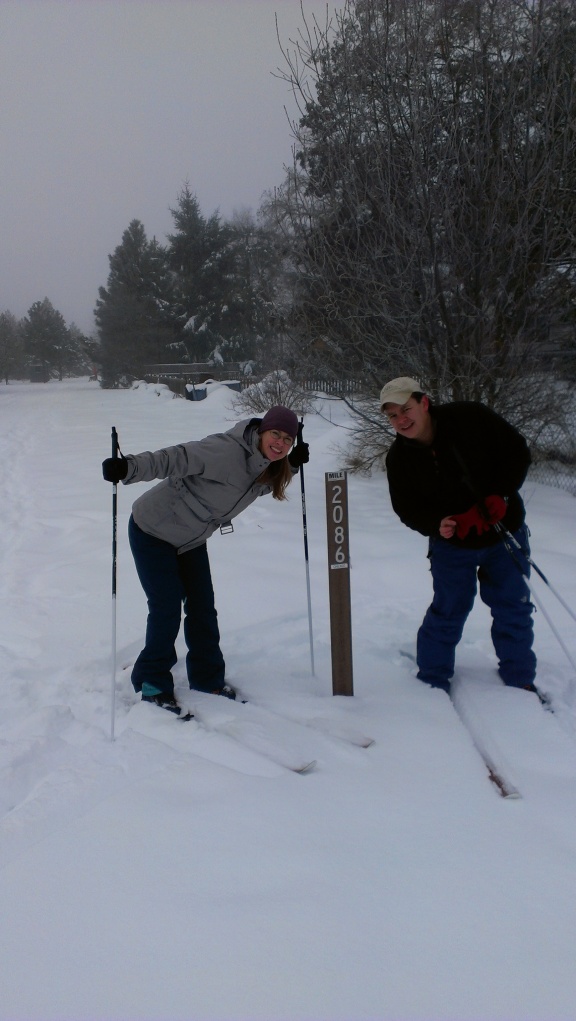 Cle Elum and Roslyn are such beautiful towns in which to observe nature – with the Cascades looming to the north and south, and the Yakima River running through town (Chad is now planning his fly-fishing trip here), there is much to see and do.

Directions: To Cle Elum: From I-90  take exit 84 towards Cle Elum. Merge onto West 1st Street and turn left on W. Stafford Street. You will find the trailhead to the Coal Mines trail at Stafford and West 2nd Street.

If you prefer to start in Roslyn, from I-90 take exit 80 toward Salmon La Sac/Roslyn. Turn left onto Bullfrog Road and drive a little more than 2 miles. At the traffic circle, continue straight to stay on Bullfrog Road. At the next traffic circle, take the 2nd exit onto WA-903N (also known as S. 1st Street). S. 1st Street takes you into the town of Roslyn. Turn left at Pennsylvania Avenue – the Brick will be on the corner of Pennsylvania and S. 1st Street. The Coal Mines trail can be reached by turning right onto Pennsylvania Avenue (off S. 1st Street) and proceeding one block to the Northeast. Go right on the trail to head towards Cle Elum or go left to go to the town of Ronald.

To the Iron Horse Trail: From I-90 take exit 84 towards Cle Elum. Merge onto West 1st Street and turn right on W. Railroad Avenue. Cross the bridge (the road has now become S. Cle Elum Way) and continue straight until you reach Madison Avenue. 1 block south of Madison Avenue, you will see the Iron Horse trail, however we chose to take a right on Madison and then a left on 6th, and a right on Milwaukee to park at the Cle Elum Train Depot.