We’ve been looking for an icy-ish trail where we could break out our new micro-spikes and put them to use. Reading some trip reports on WTA.org, we decided that the Talapus and Olallie Lake Trails would be perfect.

We chose a beautiful sunny day for the hike and drove up, up the bumpy road to the trailhead. The trail begins with woodland switchbacks which then led to a ridge trail lining a creek.

Going about a mile up this trail, the ice began to appear, so we donned our microspikes and were glad to have them.

Chad was surefooted in his microspikes.

As we ascended the trail, it became packed with snow/ice. (Some people hiked without any sort of traction gear and were slipping and sliding precariously on the trails). We crossed a few snowy (icy) bridges over small streams… 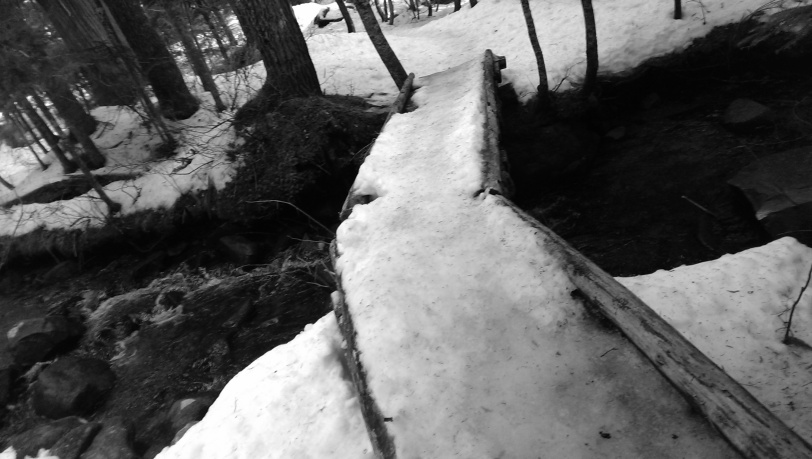 and finally made our way to the first lake – Talapus Lake.

The view was breathtaking. A frozen lake surrounded by mountains and trees. The best part was the quiet…idyllic tranquility that I fear won’t be replicated if we hike here in the summer. (These lakes are reported to be very popular in the summer). 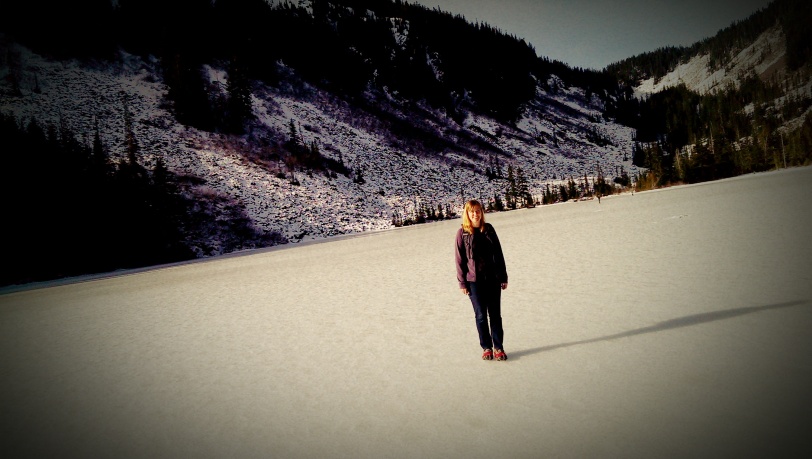 A few other parties were on the lakes – taking photos and some fishing through the ice. After getting our fill of the alpine air and the wonderful scenery, we pushed on to the next lake trail. 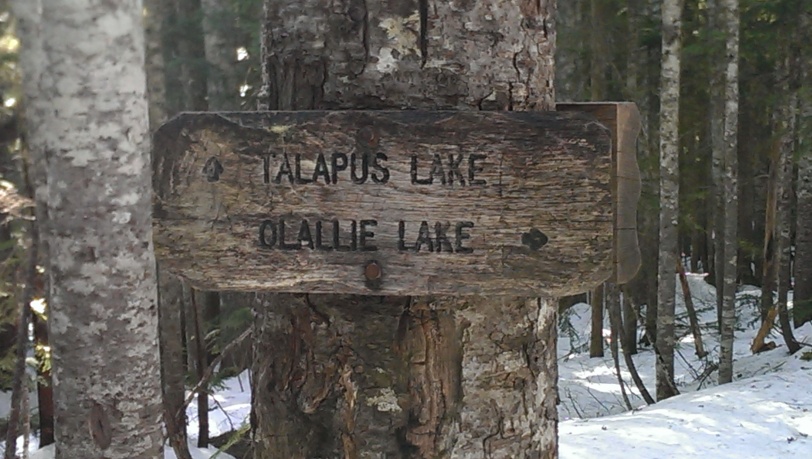 We encountered some downed trees blown across the trail, so we off-roaded for a short while until we met up with the trail again. There was less ice on the trail to Olallie, but the microspikes still came in handy. Less than a mile from Talapus Lake, we reached Olallie Lake tucked behind mature trees.

Taking in the splendor of this beautiful Alpine lake, we decided to have a snack. We broke out our granola bars and noticed some small jaybirds flying awfully close by. I had read that in the summer, these jays (known as “robber jays”) literally steal your food out of your unsuspecting hands.

Little did the jays know that they were in the presence of the bird-whisperer, Chad Smith! Chad reached out his hand with a bit of granola bar on it and the little jays flew down, perched for a second and filled their little bird bellies.

The Bird Whisperer at work. 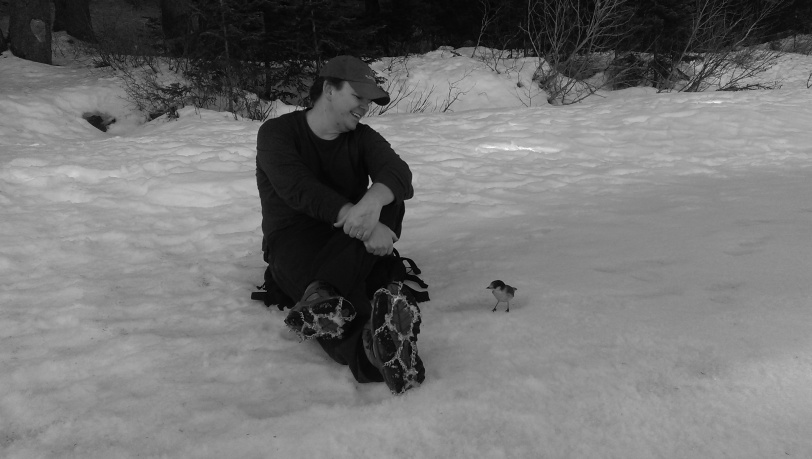 Chad repeated this for most of his bar (while I selfishly scarfed mine down!). I tried feeding the birds, but was a bit more sheepish about them landing on my hand. After one attempt, I returned the food to Chad to continue feeding his feathered friends.

Once the birds had had their fill (read: we ran out of food), we made our way back down the trail. The trails were more crowded on our return, but still tranquil compared to what we’ve read the summer conditions would be like. This is a great trail with epic views in either season, but if you go in winter, please be safe and bring microspikes! And don’t forget to bring some snacks for the birds 😉

Directions to Trailhead: From Seattle, drive on I-90 East. Take Exit 45 and turn left under the freeway on FR 9030. After 1 mile, bear right at the junction. Continue on this road – the trailhead is at the end of the road (up the hill).

One thought on “Talapus and Olallie Lakes”