What better way to ring in the New Year than by washing away 2013 in a polar bear plunge in Puget Sound?

When Chad and I first moved here two years ago, we decided to take a New Years’ Day walk at Golden Gardens. When our car pulled up to the park, we were amazed by how many people were on the beach. What was going on?

It turned out to be Ballard’s Annual Christmas Tree Burning and Polar Bear Plunge – a tradition that is now in its fourth year. After witnessing this event in 2012, Chad and I participated with the burning of our own tree and taking the plunge in 2013.

This year, we invited several of our friends to join us. We were pleasantly surprised when all showed up for this daunting plunge into the cold waters of the Sound!

We got there around 10:00 am with our coffees in hand and our dry Christmas trees waiting for their final gift to us  – raging heat, which is much needed after the plunge! We found an empty fire pit and soon were joined by a couple who didn’t have a tree to burn, but wanted to participate so they brought firewood and kindling to start the fire. It didn’t take much to get the fire going, especially after we put the first Christmas tree on the flames – wwoooooosh!

Up in a raging blaze within seconds.

A few minutes before 11:00 am, the master of ceremonies (I have no idea how he was appointed, but he did a good job) called out to the crowd to announce the plunge would soon commence. At this point, a few hundred people stripped down to their bathing suits – ourselves included. After counting down the final seconds, we all ran screaming with glee into the frigid waters of the Sound.

Some jumped in all the way, some cannonballed, some chickens (like me!) only ran in until the water hit our knees. 2013 wasn’t so bad? Do we need to wash all of it off? 😉

Afterwards, feeling refreshed and ready for a new year (and some warmth!), we added more trees to the fires and enjoyed the communal aspects of this New Year’s ritual.  (It does seem to one of a few days when Seattleites lose all inhibitions and actually talk to random strangers). 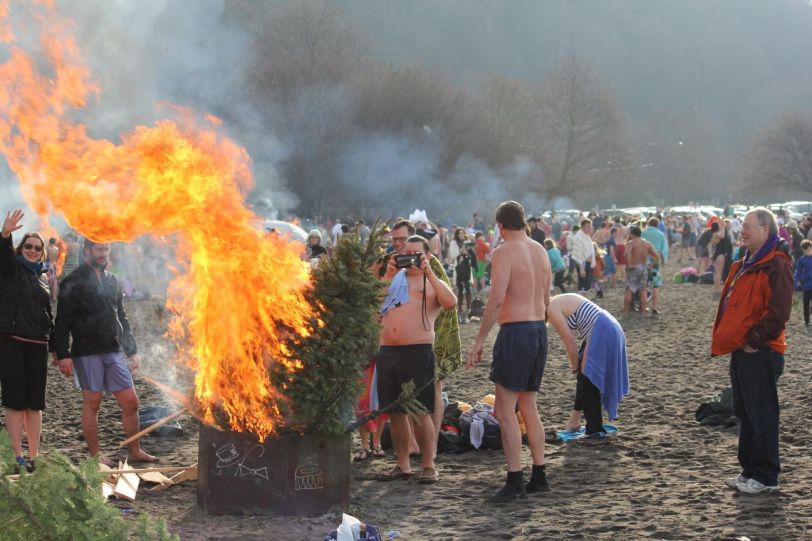 As the morning wore on, more families and friends showed up with their trees. Once divested of the dry timber, they took their own plunges into the water, cheered on the by remaining crowds. 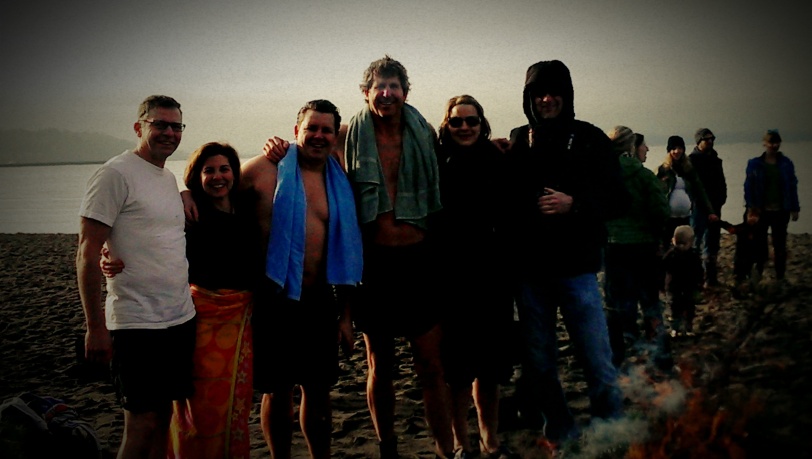 We love this event and next year, I plan to plunge even further. It was a great day spent with friends and friendly strangers and a great way to start 2014. Happy New Year!

One thought on “Taking the (Polar Bear) Plunge”