Deception Pass State Park: A Day at Deception Before Flexing Our Mussels

Last summer, en route to a party on Whidbey Island, Chad and I drove through Deception Pass State Park. We didn’t have time to stop and explore, so I made a mental note to get back there as soon as our schedules allowed. This past weekend, our schedules finally allowed.

Deception Pass State Park is rather large, covering 4,134 acres with 77,000 feet of saltwater shoreline and 33,900 feet of freshwater shoreline on three lakes. This would not be an area we could tackle in just one day! So for our first outing, we decided to explore Bowman Bay on the Fidalgo Island side of the park.

This part of Deception Pass State Park offers spectacular views, abundant picnic areas, camping sites, a playground, a beautiful 450 foot dock that leads into the bay and short but fantastic hiking trails (including over 1.2 miles of ADA designated trails).

The park is adjacent to the Naval Air Station Whidbey Island. So, from time to time, you will see and hear navy trainers. This thrilled Chad. Some might find the jet noise disrupts tranquility, but we felt like we had our own personal air show!

We began the first of a two-part hike at the center of the bay and walked north on the trail to Rosario Beach. Signs located near the trailhead note that the total distance of the hike to Rosario  Beach is 1.5 miles, perfect for those wanting a short hike.

The Rosario Beach trail climbs quickly (100 feet), getting your heart pumping as it skirts the north side of the bay before winding west to a small peninsula called Rosario Head. The views along the trail are incredible as you look down upon the bay. The trees that dot the cliffs are  wind-worn and bent into crazy configurations. After a good rain the parts of the path can get wet, muddy and then slippery, so, be careful and watch your footing!, especially when walking downhill.

We stopped at Rosario Beach to view some cool  tide pools. (If you visit, be mindful of walking on/within the tide pools  so you do not disrupt or harm the  creatures living there.  The Park has laid out a path with stainless steel markers to guide your way).

Near the tide pools we stopped to read the tale of “The Maiden of Deception Pass” which was on placards circling a fantastic statue of the Samish Patron Saint. (We won’t ruin the story for you – you’ll just have to go read it for yourself and make sure you notice how the statue is just slightly different on each side). We love that at many of the parks in the area you will see statues of Samish lore. We love how  the locals celebrate the history of the indigenous tribes from these areas. 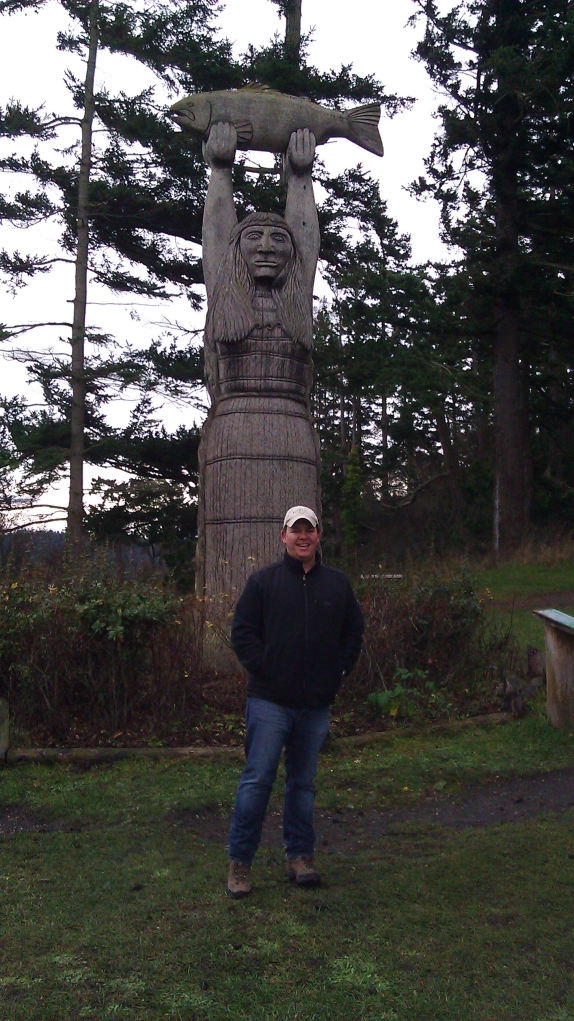 Chad by the Maiden of Deception Pass

We continued on the trail looping the edges of Rosario Head. There we took in the awesome views of the Olympic Mountains from atop the slightly scary 50 ft cliffs of Rosario Head. Make sure to carefully look down at the water’s edge to see whether the Maiden has returned.

Ever since learning about The Orca Network, we’ve  been determined to spot a pod of Orcas which are reportedly swimming between Vashon Island and  the San Juan Islands this time of year.  Seriously? The only whales we saw in the midwest were at Chicago’s John G. Shedd Aquarium. Seeing whales in their natural habitat is exhilarating. So whenever the chance of a whale spotting presents itself, it becomes our search for the Holy Grail. The Orca Network posts almost-daily sightings of the beautiful whales, and Rosario Head is a great spot for whale watching when the creatures are near, but alas, this would not be the day for us to see them (We later read they were down  by Richmond Beach this particular day).  This peninsula is a wonderful lookout to the Sound, so we plan to return to Rosario Head in the future for another attempt at whale and seal watching. (The search continues!).

View of the Sound – great even on a wintery day

We made our way back towards the bay and then proceeded to the south end of Bowman Bay, passing the boat launch and pier. The pier is a great spot to bring  children or elderly people who want to take in the beauty of Bowman Bay without having to hike up steep hills. In fact, it’s important to note that you can make a  great day of it at Bowman Bay without climbing any of the adjacent hills. The playground, pier, and picnic areas are all on level ground with the bay.

Near the path to Lighthouse Point, we passed a covey of quails. They were cute, but  naturally skittish little birds and they reminded us once again of how many spectacular creatures live in the Pac West. This park supports a wide variety of indigenous land and sea creatures, including crab, foxes, deer, turkeys, owls, otters and of course, whales.

The path leading to Lighthouse Point is about  1.5 miles  (part of which is a loop) and it also climbs quickly  (about 50 feet) before descending to a small beach dividing Bowman Bay from Lottie Beach. Once we passed the beach, we climbed the trail looping this peninsula. This path provides great views of Deception Pass (the narrow strait which divides Fidalgo Island from Whidbey Island and is so named because  explorer George Vancouver mistook this channel to be the mouth of a river which in turn misled him into thinking Whidbey Island was a peninsula instead of the island it actually is – so “Deceiving!”).  On this path, you can also see the fantastic Deception Pass Bridge (built in 1935 and looming 180 feet above the strait), various small cliffs, and hidden coves (note to self: we must come back here with kayaks!). All told, we hiked about 5 miles and we had definitely worked up an appetite so we left the park and made our way to Coupeville for a late lunch.

The Cliffs of Insanity – Just Kidding

Coupeville is a darling small town on Penn Cove. If you ever get the chance to go there, you should spend a weekend at one of the B&Bs, go into the charming Coupeville Bookstore, taste the local fare and explore the all the quaint shops that line Front Street. To get to Coupeville from Rt 20, we turned left on  Madrona Way to wind our way towards the town. En route, we drove along Penn Cove and caught views of the mussel flats where the renowned Penn Cove mussels are farmed. Once in Coupeville, we decided we had to taste these mussels and went to the best place in town to get our fill, Toby’s Tavern.

Located on Front Street, (the main street that runs along the waterfront),  with great views of the Port of Coupeville and Penn Cove, Toby’s is a lively spot even in the dead of winter (We can only imagine how crowded it must be in the summer). It’s part sports bar, part northwest lodge (with elk-, deer-, ram- and bison-heads displayed on their walls), and part local tavern.

Our charming waitress, Sue, told us we were so lucky to be able to taste the world-famous Penn Cove mussels in the very cove where they are farmed. Indeed they were tasty and affordable. You can get two pounds of mussels for just over 20 dollars, plenty for two people or one hungry hiker, as in Chad’s case. The mussels come with four large slices of garlic bread which of course must be dunked into the savory juice that collects at the bottom of your bowl. The fish ‘n chips were also delicious, featuring cod hand-breaded at the restaurant.  Toby’s also has a wide assortment of beers on tap as well as a full bar.

The mussells were tasty!

Toby’s was the perfect way to end our hiking adventure.

Directions: To Deception Pass State Park: From I-5 take exit 230 and head west on State Route 20 . Turn left on SR 20 (sign for Oak Harbor), continue for approximately 5 miles to Rosario Beach Road (just past Pass Lake). Proceed 100 yards, then turn left (signed for Bowman Bay), following this park road down to the Bay where you will find day-use parking at the Civilian Conservation Corps Interpretive Center (if this lot is full, park at the nearby boat launch lot). The drive from Seattle is approximately 1.5 hours one-way. If you are in the mood to see more of Whidbey Island, you can take the ferry to Clinton (on Whidbey) from Mulkiteo and then drive north through the Island on Rt. 20 to the park (this drive takes a little over an hour in itself). The ferry costs under $10 for car and driver one-way. There are additional fees for each passenger.

Pets: Dogs are allowed in the park, but must be on leash at all times.

One thought on “Deception Pass State Park: A Day at Deception Before Flexing Our Mussels”